Ugandans wowed as manufacturer posts photo of country's A330 plane 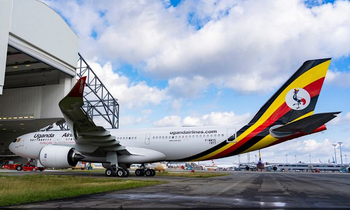 Ugandans rushed to post comments on social media after Airbus posted the first photo of one of the A330 planes that the country's national carrier, Uganda Airlines, ordered in 2018.

A one Jimmy Wyclife said: "We're grateful to our leadership. Long live, Uganda."

For Semukuye Zziwa, the plane had come at the right time. "As we celebrate this independence month, thank you, Lord," he said.

Wandex Charles said: "What a nice flag for my country Uganda. Thank you, airbus."

In 2018, Uganda Airlines signed a memorandum of understanding for two A330-800neo, the new version of the A330, a medium-to-long-range wide-body twin-engine jet airliner made by Airbus.

The agreement was then announced at Farnborough airshow by Ephraim Bagenda, the CEO of Uganda Airlines and Eric Schulz, the Airbus Chief Commercial Officer.

Uganda Airlines plans to use the A330-800neos to build its international long-haul network with the aircraft offering cutting-edge technologies.

"This agreement demonstrates our ambition for economic growth supported by the robust aviation industry. The A330-800neo combines low operating costs, long-range flying capability and high levels of comfort. We are looking forward to launch operations and offer our customers best-in-class service," said Bagenda.

"We are delighted to welcome Uganda Airlines among our A330neo customers, the A330neo will bring a range of benefits offering unrivalled efficiencies combined with the most modern cabin. We look forward to seeing the A330-800neo flying in the colours of Uganda," said Eric Schulz, Airbus Chief Commercial Officer.

"Fitted with the new Airspace by Airbus cabin, the A330neo will bring a range of benefits to Uganda Airlines and its customers, offering unrivalled efficiencies combined with the most modern cabin," Airbus said on their website.