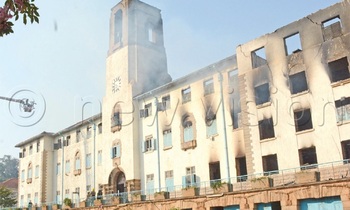 Police investigators have picked interest in six people who were captured on Makerere University's closed circuit television cameras (CCTV) entering the Main Building before it was gutted by fire.

The footage reportedly captured the six people entering the building, but they were not seen exiting the premises by the time the fire gutted the building. The CCTV footage is a subject of intense analysis by experts.

A fire broke out at the Main Building — Ivory Tower — at Makerere University at 1:05am, on Sunday. Fire fighters got the flames under control just after 12:30pm on Sunday.

Smoke was first reported just after 12:45am at the building, which is located about 200 metres from the university Police station. Police said they detected the fire via their CCTV cameras installed at the university.

No one was hurt and there is no word yet on what caused the fire at the iconic building that was recently renovated. The renovations started in December last year and the exercise ended in February this year.

"It is a sad day. It is the worst disaster in the university's 100 years of history. This is not how we planned to celebrate 100 years of the best university in the country next year," Nawangwe said.

"I was called and alerted about the fire a few minutes after midnight. The fire caught up very fast. We called fire brigade — unfortunately, the first vehicles (fire brigade) could not push the water high," Nawangwe said, adding that: "By the time cranes came, the fire had entered the roof."

"We have not lost many documents. No disaster at the moment. We have all information digitised," he added.

Security sources revealed that six people were last seen at the iconic building, according to the CCTV footage.

The Police are analysing the identities of the six people, but it is believed they are university employees attached to the offices that were affected. Police remained tight lipped on their identities.

There have been ongoing probes linked to projects under the finance office at the university by the Police's Criminal Investigations Directorate (CID).

Another source told New Vision that some of the people captured on the CCTV footage are from the finance, human resource and the custodian offices.

"They were captured on CCTV as they accessed the facility, but were not seen exiting the building at any time, Their conduct is suspected," the source said.

Police forensic investigators spent the great part of yesterday lifting finger prints from ‘three particular doors and two windows at the rear of the historic building.

"The interior is gone," a crime scene officer, who spoke on condition of anonymity, told New Vision on Sunday.

The officer said the cause of the fire is being investigated, but added that a fire brigade officer told him that they suspected a spark from an electricity extension that was placed near a water dispenser.

"The building has no smoke detectors. By the time residents saw it, the fire had spread," the crime scene officer said.