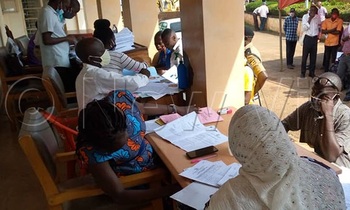 ELECTION WATCH
The nomination exercise for  lower council leaders enters day three at Mbale City Hall in Mbale. The majority of  aspirants are not following the Covid-19 guidlines. (Report by  Paul Watala)

The washing point at the nomination center at Mbale City Hall. The exercise began at 9:00am but up to now, none of the aspirants has made an effort to wash their hands.