Did you know that Brig. Shaban Opolot was the first Ugandan army commander? 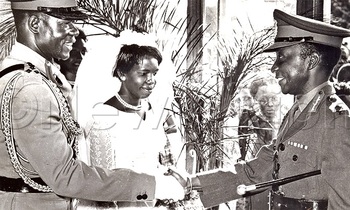 Brig. Shaban Opolot was the first Ugandan commander of the national army and later became its chief of staff. He was one of the key figures to emerge on Uganda's military scene, following independence in 1962.

By the time Sir Edward Mutesa II became President of Uganda in 1963, Opolot was the leading black soldier in the army. The two developed a professional, respectful and cordial relationship.

In his book, Desecration of my Kingdom, Sir Edward Mutesa described Opolot as a "professional soldier,' who refused to be swayed by Milton Obote's demands to go against the president".

Opolot opposed Obote when he tried to use the army to change the Constitution of Uganda.

Opolot was dismissed from the army by Obote on October 7, 1966, for ‘activities and behaviour prejudicial to the stability of the armed forces' and was sent to Luzira Prison, where he spent five years but was later released by Idi Amin.