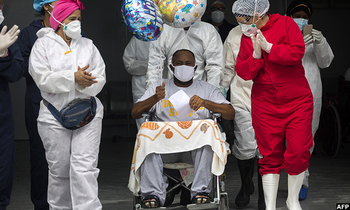 A China-developed vaccine could be ready for the public as early as November, the chief biosafety expert at the Chinese Centre for Disease Control tells state broadcaster CCTV.

The crisis cost the global tourism sector $460 billion in lost revenue during the first six months of 2020 as the number of people travelling plunged, the UN says.

The pandemic has killed more than 930,182 people worldwide since surfacing in China late last year, according to an AFP count at 1730 GMT on Tuesday based on official sources.

More than 29.3 million cases have been confirmed.

- No deaths in Australia -

Australia records zero new virus deaths for the first time in two months, as a slowdown in new cases allows a crippling lockdown in its second-biggest city Melbourne to be eased.

China has locked down a city of more than 210,000 people and will launch a mass testing programme there, officials say, after three cases were found in Ruili in western Yunnan province, a major land border crossing point with neighbouring Myanmar.

Dublin pubs will remain shut when those outside the capital reopen next week, the Irish government says, unveiling new restrictions following a "very worrying" surge in cases.

Tour de France organisers are in exultant mood when announcing that all of their cyclists are negative for Covid-19 in the final round of tests, with six days left in the world-famous cycling race, scheduled to end on Sunday with its parade up the Champs Elysees in Paris.

The news marks a success with organiser ASO who will claim the race has provided a blueprint in how to stage a major sports event in the middle of a pandemic.