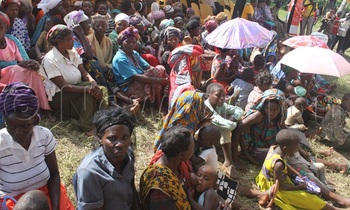 More than one million people across Uganda have been affected by severe floods, with 300,000 struggling to find food, clean water, shelter and medical care, the Government said yesterday.

The Minister for Disaster Preparedness and Refugees, Hilary Onek, said multitudes of people have been displaced by lakes and rivers that have invaded their land and homes.

"The impact of the current torrential rains has caused a lot of havoc in the country since April, 2020. Due to these heavy rains, the level of water in all rivers and lakes in the country has risen, leading to floods and displacement of communities along the shores and banks. The people are currently sleeping in churches and schools and in need of food and non-food relief items," Onek told journalists.

He said in the Mount Elgon area, the situation is appalling with the heavy rains causing landslides in Busaano sub-county, Mbale district resulting in the displacement of 567 households and one death.

"Michael Mukhaali, 45, died after his house was completely destroyed and covered by mud. Two others are feared dead and a host of properties and crops were destroyed in Ndite sub-county, Bundibugyo district following a mudslide last night (Wednesday) at around 10:00pm," Onek said.

In Mbale, the earth in the villages of Buwangwa, Kiteka, Nabikyenga and Bufooto developed cracks after heavy rains, leaving mothers and children extremely vulnerable, while hundreds of residents in Mazimasa and Himutu sub-counties, Butaleja district, were also displaced following a downpour.

"Those at risk have been advised to relocate and stay with relatives as the Government moves to provide them together and their host families with food and items, such as blankets, tarpaulins and mosquito nets," the disaster preparedness minister added.

In Kween three people were killed while Rwenzori, Bunyoro, Lango and Teso were affected with 122 islands being submerged. In Kampala, the areas of Bukasa, Mutungo, Gaba and Munyonyo have been most affected.

Onek said, so far, sh40b has been spent on relief aid to 300,000 people across the country, but another sh60b is needed to meet short-term challenges as rains continue ravaging communities.

"The rains are still continuing according to the current weather forecast issued by Uganda National Meteorological Authority covering the months of September to December. The rains could start receding in October, but we are working with disaster management committees to ensure we evacuate and provide families with coping mechanisms amid COVID-19," the disaster preparedness and refugees minister added. said.