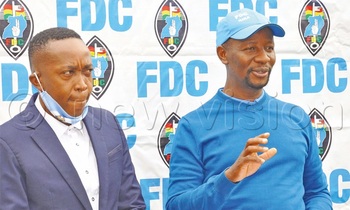 The Forum for Democratic Change (FDC) candidates for the presidential flag-bearer positions have cancelled their campaigns which were due to kick off on Monday.

The FDC national chairperson, Wasswa Biriggwa, is competing against the party president, Patrick Amuriat Oboi, to hold the party's flag in next year's presidential elections.

The duo, according to the party election roadmap, had planned to start their nationwide campaigns with Mukono, Buikwe, Buvuma and Kayunga.

Speaking to journalists at the Najjanankumbi-based party headquarters on Monday, FDC spokesperson, Ibrahim Ssemujju Nganda, said the joint regional campaign for the two candidates has been delayed due to logistics-related issues.

He, however, said each candidate will continue with separate campaigns, until the end of this week, when a new date will be announced.

Although under the Political Parties and Organisationa Act, all political parties with representatives in Parliament are entitled to government funding, FDC disclosed that they have not yet received the money, despite approval by Parliament.

"We need this money more than before because of the ongoing elections. We want the Electoral Commission to explain the whereabouts of this money," Ssemujju said.

It is alleged that this could have been one of the reasons FDC's campaigns for flag-bearer candidates have delayed.

Besides the logistics challenge, sources in FDC also said both candidates disagreed with the earlier timetable, claiming it was not giving them any breathing space.

"The candidates asked us to make some adjustments in the programme, especially for Buganda regions, to enable them get some space, instead of campaigning non-stop without resting," a source said.

Ssemujju said the individual or joint campaigns will be concluded with a delegates' conference before selecting the official flag-bearer early next month. Meanwhile, FDC condemned the chaotic and violent cases that marred the National Resistance Movement (NRM) party primaries for Members of Parliament last Friday.

Ssemujju attributed this to President Yoweri Museveni's decision of allowing even those missing in the NRM voters register to participate in the elections.

"In Toroma, one of the contestants ordered a Local Defence Unit personnel to shoot at the people lining behind his competitors because they had ‘eaten' his money and in the process, a 60-year-old woman lost her life," Ssemujju said.

FDC also cited the chaos that erupted in Mbale City when supporters of Connie Galiwango and Lydia Wanyoto clashed over poll results.

FDC further expressed displeasure over the manner in which the NRM supporters violated the measures meant to prevent the spread of COVID-19.

They said the exercise was characterised by large crowds that gathered and interacted freely with many voters not wearing face masks, yet most of the polling stations also lacked hand-washing facilities.

Ssemujju said this set a bad precedent, adding that, it will be difficult to avoid the spreading of COVID-19.

"There were even processions to celebrate the results. It appears that COVID-19 does not spread during NRM internal processes; it only spreads when an opposition politician is meeting people or addressing a rally," he said.