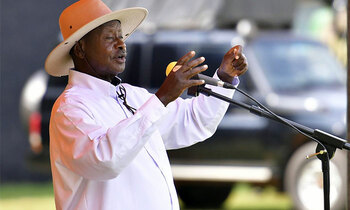 President Yoweri Museveni has ordered the Electoral Commission (EC) to fast track the procurement of new biometric machines to necessitate the digital verification of the voters using their biometric-data or fingerprints, ahead of the 2021 general election.

A flawless electoral process, Museveni said on Monday, depends on the vigilance of the people and integrity of the electoral officials.

However, speaking to party leaders at the National Resistance Movement (NRM) secretariat, where he flagged off motorcycles for NRM sub-county chairpersons, Museveni, who is also the party national chairperson, said the biometric machine will cure vote-rigging, whether people are vigilant or not. His comments were concerning the NRM primaries held last Friday, that were marred with disputes over the register and results in some areas. By press time yesterday, results of some areas had not been declared due to the disputes.

"The problem now is that these two (vigilance of the people and integrity of electoral officials) have been missing. Some of the elected officials have become corrupt. And some of the NRM people are not vigilant. So, that is why, as somebody who has been in this battle for all these years, I said no," he said.

"For the general election, we must get a method which does not allow cheating. We must have digital recognition of voters using the biometric machine. This was supposed to be done in the previous elections, but the corrupt fellows, who were in the Electoral Commission (EC) and were sacked recently, bought machines which did not do this," the President said.

EC said the officials resigned due to personal reasons.

"The corrupt team that was in EC refused to procure this system. It is, however, being procured now. This will end this sad story of the anti-democratic forces, at least as far as the problem of multiple voting and multiple registrations is concerned. It will also deal with the problem of ballot stuffing because the fingerprints digitally read must be equal to the votes in the ballot box," Museveni said.

In the run-up to the 2016 general election, the EC procured a sh90b biometric technology. However, during the hearing of the Supreme Court petition that was filed by former Prime Minister Amama Mbabazi, challenging the outcome of the presidential polls, the then EC chairperson, Eng. Badru Kiggundu, said he did not know the number of voters who were verified by the biometric machines because the equipment was not programmed to release data immediately before the whole electoral cycle has been completed.

The procurement of a new biometric machine, EC sources said, is estimated to cost about sh115b.

A seasoned election observer, Crispin Kaheru, explained that each biometric device should ideally carry a voters roll of a given electoral area.

He says in order to effectively address issues of multiple voting, each biometric kit should be linked with the national voters' register.

He observes that in 2016, the biometric machines were not in sync with the national voters' register. This meant that it was possible for a voter to vote more than once at different polling stations, especially at polling stations that are not located in the same constituency or district.

The panacea to multiple voting will require an accurate voters register and an integrated biometric voter verification system that is nationally synced.

The acting EC spokesperson, Paul Bukenya, said their technologies are being upgraded to enhance voter identification and results transmission. He noted that during the 2016 polls, the commission had the fingerprint identification

"We introduced that technology last time and, now, we are upgrading it," he noted.

He explained that after the 2016 elections, the laws governing elections were amended to enable EC explore use of a wide range of technologies.

However, he declined to give specifics on the technological upgrade, saying he would have to look at the relevant documents. He also declined to comment on the statement by the President that corrupt officials had frustrated procurement of the biometric equipment.

For the party, Museveni said, there is no money for this biometric technology, adding that this informed the decision for using the mode of lining up to vote. Calling for calm as various party officials that participated in last week's NRM parliamentary primaries cry foul over vote rigging-related issues, Museveni said the party will set up zonal tribunals of elders to handle the emerging petitions and contestation of the internal election results.

"The system is going to clean up. All those who have made fools of themselves, like the one in Butemba County that the secretary-general talked about, are candidates for jail. We had a minister who beat up people and was seen with guns. That one is in jail. Therefore, this game is over. Lining up was revolutionary. It was medicine for cheating," he pointed.

State minister for labour Mwesigwa Rukutana was arrested on Saturday in relation to a shooting incident where a supporter of his rival was severely injured.

In her report to the President about the party primaries, the secretary-general of NRM, Justine Kasule Lumumba, decried what she described as impunity, forgery and violence that characterised the primaries in some areas.

"After the people had decided whom they want to be their leaders at the parliamentary level, some of our staff were lured into changing declaration forms, forgetting that the people who had participated at the village level do not need to write, but register using their faces. So, what is coming out in some cases is not good," she said, citing Butemba County in Kyankwanzi district, where she said a candidate who garnered 3,000 votes, brought in soldiers, cordoned off the place and declared themselves winners and walked away, leaving behind the Police to struggle with the villagers who were expressing anger.