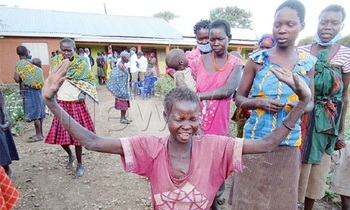 Women and children have fled their homes over endless attacks by suspected rustlers in Napak district in the last two weeks.

The families are hosted by the Catholic Church, Italia Solidary, a Christian based humanitarian agency and many sleep on shop verandahs.

Several people were also sheltered at the homes of their relatives or friends and many more, especially men, are spending nights in incompleted structures on the outskirts of Kangole town council.

"These people usually strike villages at 10:00pm, asking for animals. If they do not find them, they take saucepans, food and other household property that they get across,"

Adir said she was forced to leave her village due to frequent attacks and killings that have become the order of the day, for the last three weeks.

Another victim, Naduk, from Lomerimong village, said the gunmen have killed three people in her village, with several others injured in the last four weeks.

However, her report had by press time not been verified by the Police.

"Many of our animals have been taken by suspected Matheniko raiders," she narrated.

In Lopida village, where most women and children are camping at night, the multi-purpose hall has since become a dormitory for the displaced families.

Whereas many have face masks to deter the spread of the coronavirus, sanitation is lacking.

By press time, the two-stance latrine in the compound was dirty due to shortage of water. Several mothers and elderly women who braved the frequent nights at the centre, know nothing about a sanitiser.

Asked if they washed their hands, many said water and soap were scarce.

One of the displaced women, Maria Nate, from Nachuhuka village, appealed to the Government to provide them with mosquito nets, tarpaulins and utensils, saying they have lost a lot of property to the thugs.

She reminded the authorities to come to their rescue concerning the coronavirus, saying the pandemic has been compromised as a result of the deteriorating security situation in Napak district.

Efforts to speak to the Resident District Commissioner were futile as his known phone numbers were not available.

He said security was being restored by the armed forces, saying a crisis meeting would be held to discuss the worsening situation.

"During the removal of guns from the Karimojong, the Government placed emphasis on protecting the people and property," he said, adding that the situation has worsened.

Lomonyang challenged the army to ensure peace is restored in the district, saying insecurity has persisted since October last year.

He said in the last one week, a dozen people have been shot dead in the two sub-counties of Ngoleriet and Lotome.

"On Tuesday night, gunmen staged an illegal roadblock in Kangole ward, killing one person and injuring another," Lomonyang noted, adding that the third victim is still missing.

He said the raiders have continued terrorising many families with unspecified livestock stolen in the last couple of months.

Asking the Government to ensure security for its people in the region, Fr. John Kennedy Onoba, the parish priest at Kangole, said the people were living in fear of more attacks from the armed rustlers, adding that several lives had been lost in the previous months.

The Uganda People's Defence Forces 3rd Division spokesperson, Maj. Peter Mugisa, said the army had embarked on relocation and deployment of forces in the district to counter the attacks, saying in the next few weeks, normalcy will have returned to Napak.

However, Mugisa said they would jointly handle the matter with the Police in the fight against the insecurity. He appealed for calm.

After 70 years of being locust-free, Uganda was attacked on February 9, by swarms of desert locusts crossing from Kenya.

The Government team, comprising the agriculture ministry and armed forces led by the Uganda People's Defence Forces, have fought the desert locusts, which had been reported beyond Karamoja.

The East African Desert Locust Control Organisation also supported the fight against the migratory pest. By mid-February, the desert locusts were reported in 12 districts in parts of Karamoja, Teso, Kapchorwa, Acholi, and Lango.

The second time, the desert locusts came through Moroto and were controlled in the northeastern part of the district in July.

However, in the second wave, the locusts recently entered Moroto district in huge numbers, with one of the biggest swarms decimated at Naput village in Rupa sub-county, a month ago.

The locusts fly in large swarms and feed on crops and vegetation in vast areas.