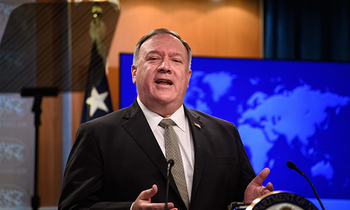 US Secretary of State Mike Pompeo announced sanctions Wednesday on the prosecutor of the International Criminal Court, Fatou Bensouda, objecting to an investigation of US soldiers for alleged war crimes in Afghanistan.

Also added to the US sanctions blacklist was Phakiso Mochochoko, director of the ICC's Jurisdiction, Complementary and Cooperation Division, for "having materially assisted Prosecutor Bensouda," Pompeo said.

Pompeo said other ICC officials have already faced denial of visas to the United States over the investigations of US military personnel.

"Today we take the next step because the ICC continues to target Americans, sadly," he said.

He added that visa restrictions and broader sanctions could be applied to those helping Bensouda and Mochochoko.

The move came after President Donald Trump authorized sanctions on the Hague-based tribunal on June 11 for probing and prosecuting US troops.

Pompeo at the time referred to the ICC as a "kangaroo court" and warned that if US soldiers are investigated by it, those of US allies in Afghanistan risk the same threat.

US Attorney General Bill Barr said in June that the ICC has become "little more than a political tool employed by unaccountable international elites."

The sanctions were announced just two months before US elections, in which Trump is running in part on his record of standing up to international institutions which don't bow to US demands.

But Washington's move also added to the broader pressure on the ICC to shore up its legitimacy, 18 years after it was founded to prosecute war crimes, crimes against humanity and genocide.

The United States -- like Russia, China, Israel, Syria and a number of other countries -- is not a member of the ICC, and its opposition to the court is longstanding.

In 2002 the US Congress even passed the so-called "Hague Invasion Act" allowing the US president to authorize military force to free any US personnel held by the ICC, in theory making an invasion of Dutch shores a possibility.

But the investigation into alleged wartime atrocities in Afghanistan possibly involving US military and civilian officials has turned Washington's low-level opposition into a concerted campaign against the institution.

The United States argues that it has its own procedures in place to investigate accusations against troops.

Trump, however, used his executive powers last year to clear three military members over war crimes, including in Afghanistan.

Also underpinning Washington's enmity is the ICC's investigation into alleged war crimes by US ally Israel against Palestinians in the West Bank and Gaza.

Last year the Trump administration revoked Bensouda's US visa, but the court has continued with the probe, leading to the president's June decision to permit economic sanctions against the court.

Balkees Jarrah, senior counsel at Human Rights Watch, said the sanctions move Wednesday "Marks a shameful new low for US commitments to justice for victims of the worst crimes."