The attacks that began on January 7, 2015 sparked a series of jihadist attacks on French soil, including "lone wolf" killings by people said to be inspired by the Islamic State group that have since claimed more than 250 lives. 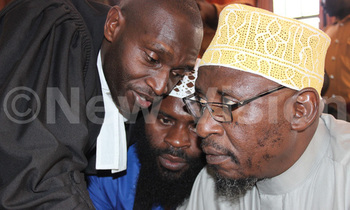 The Court of Appeal is slated to deliver its verdict in an appeal by jailed Tabliq leader, Sheikh Muhammad Yunus Kamoga, who was in 2017 sent behind bars for life over terrorism on Wednesday.

In 2017, the International Criminal Division of the High Court presided over by justices Ezekiel Muhanguzi, Percy Night Tuhaise and Jane Kiggundu convicted the appellants of terrorism, but cleared them of the charge of murder of sheikhs Mustafa Bahiga and Hassan Kirya.

The court sentenced Kawooya, Kamoga, Mudde Bukenya and Kalungi to imprisonment for the rest of their lives.  Ssekayanja and Kakande were jailed 30 years.

In their appeal, the group list 10 grounds which they want the Court of Appeal to base on to set aside their conviction.

According to their memorandum of appeal, they claim that the lower court failed to properly evaluate the evidence before them as they applied to the law of terrorism.

They also blame the trial court for relying on what they describe as uncorroborated circumstantial evidence that led them to a wrong decision.

The appellants further claim that the trial court made a mistake by convicting them without compelling allegedly substantiated and corroborated evidence to support alleged attacks and threats to members of "Jamiya Daawa Asalafiya" Muslim sect.

They also blame the trial judges for convicting them of the offence of terrorism on the basis of the evidence of fliers, which as of itself did not discharge the prosecution of proof for the offence, thereby arriving at a wrong decision.

They also accuse the trial lower court judges of erroneously convicting them of the offence of terrorism basing on hearsay evidence relating to the wrangles in the Muslim community that was lacking in any probative value to prove the evidence or at all.

The appellants faulted the trial court for sentencing Kawooya, Kamoga, Bukenya and Kalungi on what they described as an illegal, severe, harsh and unconscionable principle of their leadership status in their Muslim sect.

However, the DPP maintains there was sufficient evidence to support their conviction on both terrorism and murder.