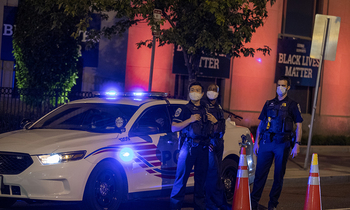 The white police officer who shot black 29-year-old, Jacob Blake, in the back, triggering a new wave of violent protests in America, was named by US officials on Wednesday, as NBA players led an unprecedented wave of sports walkouts against racism and police brutality.

Anger and grief have built since Sunday, when a seven-year veteran of the police force in Kenosha, Wisconsin shot Blake seven times at point-blank range while three of his children watched in the Midwestern city.

The US Department of Justice announced late Wednesday it was opening a civil rights investigation into Blake's shooting.

Local law enforcement had maintained silence as nightly protests descended into violence, and two people were shot dead when armed vigilantes clashed with demonstrators on Tuesday night. A 17-year-old teenager has since been arrested for murder.

But on Wednesday the Wisconsin Department of Justice gave its first official account of Blake's shooting, saying he had a knife "in his possession" when officer Rusten Sheskey fired his gun into his back.

It was not clear from the statement if the knife, recovered from inside the car, was in Blake's hands when he was shot or at any other point during the altercation. He survived but may be paralyzed for life.

Officers were sent to a residence in Kenosha following a domestic disturbance and during the incident "attempted to arrest" Blake, unsuccessfully tasering him, the statement said.

Subsequently, the statement said, agents "recovered a knife from the driver's side floorboard of Mr Blake's vehicle."

Blake's shooting comes just three months after another African American man, George Floyd, suffocated beneath the knee of a white officer in Minneapolis, igniting the most widespread civil unrest in the country in decades.

On Wednesday frustrated sportsmen and women took a new stand with NBA basketball players, tennis star Naomi Osaka, baseball and soccer players all pulling out of fixtures in protest.

"Despite the overwhelming plea for change, there has been no action, so our focus today cannot be on basketball," players for the Milwaukee Bucks, whose base is just to the north of Kenosha, said in a statement after boycotting their game.

Kenosha city officials ordered a 7:00 pm to 7:00 am curfew through Sunday in hopes of bringing calm after Tuesday's deadly violence, which occurred as mostly white armed vigilantes flocked to the site of protests, saying they were there to defend private property.

Videos showed one of the vigilantes shooting at protesters with an assault rifle. The man then walks down the street freely, gun slung across his chest, while protesters scatter and police vehicles drive past him.

Two men were killed and one wounded in the arm in the shooting.

Police in Antioch, Illinois, southwest of Kenosha, said Wednesday they had arrested a 17-year-old on murder charges following the killings.

The suspect has been identified as Kyle Rittenhouse, a local youth whose social media accounts reportedly pointed at an affinity for guns and law enforcement.

Facebook said it had removed the accounts of the teen suspect, along with pages of a local militia in Kenosha.

"We've designated this shooting as mass murder and have removed the shooter's accounts from Facebook and Instagram," the internet giant told AFP.

Two hours after the curfew began Wednesday night about 200 Black Lives Matter protesters marched through the city of Kenosha. A helicopter buzzed overhead, but there was no sign of police.

"I am very nervous that there is no police around. I don't really know what's going to happen," she added.

In Los Angeles violence broke out early Thursday morning between anti-racism protesters and police inside a downtown tunnel, when officers surrounded a group of about 100 and tried to make arrests, footage from ABC News showed.

Scuffles took place and rubber bullets were fired during ugly scenes that followed a march of about 300 people through the area.

President Donald Trump earlier announced he was deploying federal law enforcement and National Guard troops to Kenosha "to restore law and order" -- although local officials said they already had hundreds of state police, 250 National Guard troops, and FBI and federal marshals helping with the situation.

Trump's comments made clear the violence would also be fodder for the ongoing presidential race, with the election just over two months away.

His campaign has portrayed anti-police protests in numerous cities as an extreme leftist threat to the country.

Democratic rival Joe Biden meanwhile said he has spoken to Blake's family, and promised them "justice."

"What I saw on that video makes me sick," Biden said of the shooting footage. "I told them justice must and will be done."