"Donald Trump is the wrong president for our country," Barack Obama's wife said in a keynote speech on the first night of a convention that has shifted entirely online due to the coronavirus pandemic. 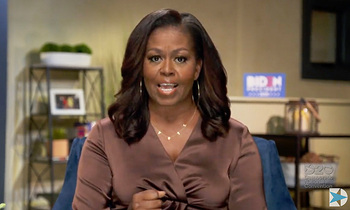 US Democrats opened their nominating convention Monday with a show of unity behind Joe Biden and former first lady Michelle Obama delivering a scathing rebuke of Donald Trump as she urged voters to reject his politics of 'division.'

"Donald Trump is the wrong president for our country," Barack Obama's wife said in a keynote speech on the first night of a convention that has shifted entirely online due to the coronavirus pandemic.

"Whenever we look to this White House for some leadership, or consolation, or any semblance of steadiness, what we get instead is chaos, division and a total and utter lack of empathy."

The pre-taped remarks came as unprecedented criticism by a former first lady of a sitting US president, painting him as a man who lacks the competence, character or decency for the job.

It was a potent message for voters who tuned in unsure of what to expect from a virtual convention that lacked the showstopping pizzazz and stagecraft of a live event.

With the Democratic Party poised to officially anoint the 77-year-old Biden as its nominee, Trump defied coronavirus concerns and staged a competing event in Wisconsin, the state where Democrats were supposed to hold their in-person convention.

"Every four years we come together to reaffirm our democracy," she said. "This year we've come to save it."

Dozens of speakers, including a host of Republicans opposed to Trump, offered a similar message.

In a poignant moment, everyday American Kristine Urquiza described how her father died from coronavirus after going out with friends when he believed the pandemic was not serious.

"His only pre-existing condition was trusting Donald Trump, and for that he paid with his life," Urquiza said.

Obama also took pains to describe Biden as a "terrific vice president" she grew to know well during the eight years he served as her husband's number two.

"He knows what it takes to rescue an economy, beat back a pandemic and lead our country," she added.

Biden "will tell the truth, and trust science," she said in a jab at Trump, who has been accused of repeatedly ignoring the advice of his scientific advisors on how to respond to the pandemic.

Vermont Senator Bernie Sanders, who challenged Biden for the nomination from the progressive left, also addressed the convention by videolink, and warned that Trump is "leading us down the path of authoritarianism."

"The future of our democracy is at stake," and electing Biden over Trump is an absolute necessity, he stressed.

"My friends, the price of failure is just too great to imagine."

Trump flew on Air Force One meanwhile to Oshkosh, Wisconsin and delivered remarks to supporters gathered on the airport tarmac.

He accused Biden and his running mate Kamala Harris of seeking to enact "crazy socialist policies" and warned the 2020 election will be "the most dangerous" ever.

"The only way we're going to lose this election is if the election is rigged," added the president, who trails Biden in nearly all national polls as well as multiple battleground states.

The Democratic convention is taking place amid a furor over Trump's own efforts to limit mail-in voting.

Insisting without proof that it fosters fraud, Trump has threatened to block extra funding that Democrats say is urgently needed to allow the US Postal Service to process millions of ballots.

Obama addressed the controversy in her remarks, warning that Trump and Republicans were "lying about the security of our ballots."

Oshkosh, where Trump spoke, is about a 90-minute drive north of the Milwaukee arena where Democrats had intended to gather in a sign of eagerness to win back Wisconsin, one of multiple Democratic strongholds which flipped to Trump in 2016.

But the coronavirus pandemic, which has killed some 170,000 people in the United States, upended election campaigning.

Biden did not speak live on Monday, but he tweeted his support afterward.

"Tonight we saw that Americans are ready to come together, and that we the people can overcome these crises and emerge stronger than ever," he wrote.

While some speeches Monday were clearly pre-taped, Biden and Harris, 55, will address the convention live via videolink, according to the campaign.

Biden, whose poll leads over Trump remains significant, despite a slight tightening of the race, is hoping Harris -- the first woman of color on a major party's presidential ticket -- will invigorate Democrats.

On Wednesday, Barack Obama will speak, and Harris will have her spotlight moment before the convention culminates Thursday when Biden formally accepts the Democratic nomination and delivers his acceptance speech.