The LC1 chairman of Bukyaye village, David Ziranago, said they tried to stop the marriage, but the mother insisted that it should go on since the girl had already had her periods. 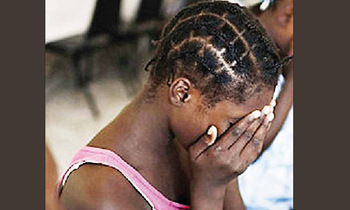 The Police recently raided a home in Nakalama parish in Bukyaye village, Iganga and arrested the bridegroom, mother of the bride and a sheikh who was conducting a marriage ceremony involving an underage girl.

Some of the guests who were inside the house took off as the Police stormed the home and in process, breaking household property and bottles of refreshments.

The LC1 chairman of Bukyaye village, David Ziranago, said they tried to stop the marriage, but the mother insisted that it should go on since the girl had already had her periods.

"The mother said nothing would stop her since it was normal for Tabliqs to marry off their daughters at a young age," he said. Ziranago said it was the third time Naigaga was giving away her underage daughters.

The prospective husband had paid sh50,000 as bride price for the primary five pupil.

According to a neighbour, who preferred anonymity, Akim had allegedly spent one week with the girl in a lodge in Iganga municipality prior to the marriage ceremony.

"The man should first be charged with defilement since he had already had sexual intercourse with the minor," he said.

Akim, while at Nakalama Police post, said he has three wives he married at the same age of 12 and wanted her to be the fourth to fulfill the demands of the Islamic faith. Naigaga said she wanted to give away her daughter so that she does not engage in premarital sex.

"Girls in this area get involved in early sex with men, which results in teenage pregnancies," she said. Naigaga vowed to marry off her underage daughter after she is released from jail, saying it is legal in the Islamic faith.

The suspects were first detained at Nakalama Police post, before being transferred to Iganga Central Police Station.

There was drama when the mother to the victim declined to sit on the same motorcycle with Akim, saying it was taboo in Busoga culture. The Police forced her to share the seat.

The Iganga district Police commander, Willy Ndawula, said investigations are underway to establish if Akim had had sexual intercourse with the victim so that charges of defilement could be preferred against him. Ndawula cautioned parents against marrying off their daughters at an early age, saying they risk being arrested and prosecuted before courts of law for procuring defilement.

Robert Waiswa, the project coordinator of Hand-to-Hand Multipurpose Initiative, a local non-governmental organisation, decried the increase in cases of child marriages, especially in Iganga, Kaliro and Bugweri during the COVID-19 lockdown.

Waiswa said research done by the organisation, which is involved in promoting the rights of girls, indicates that 143 girls below the age of 16 have been married off during the COVID-19 lockdown in Iganga and Kaliro districts.

He said poverty had forced some parents to give away their daughters to men in exchange for food and money.