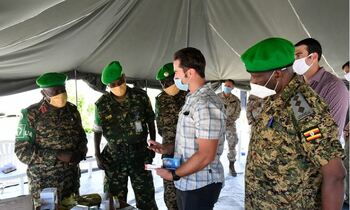 The African Union Mission in Somalia (AMISOM) on Saturday received an assortment of medical equipment and consumables, which will benefit communities in the Lower Shabelle region of Somalia.

Delivered by the US Civil Affairs Unit in Mogadishu, the items included: antifungal, anthelmintic, antibiotics, antacids, analgesics and an assortment of vitamins, according to a release from AU newsroom.

The supplies from Gift to The World, an American non-profit organization, were received by Captain Alan Goodman, of the US Civil Affairs Unit, to Colonel Ismail Sendagire, the AMISOM Sector 1 Air Defence Commander.

"AMISOM trusts that the donations will alleviate the problem of having to travel long distances for internally displaced persons and other vulnerable persons for them to receive health care.

This donation contains vital medical supplies for child welfare and general health care services" said Col. Sendagire, who represented the Special Representative of the Chairperson of the African Union Commission (SRCC) for Somalia, Ambassador Francisco Madeira at the function held in Mogadishu.

Col. Sendagire added that the donation will improve primary health care for those in need, especially women and children and internally displaced persons. He praised the US Army Civil Affairs Unit for channeling the donation by Gift to the World, and called for concerted efforts by all stakeholders to support and embrace community based initiatives so as to bring lasting peace to Somalia.

On his part, Lt. Col. Cyriaque Bikorimana, the AMISOM military Deputy Civil-Military Cooperation (CIMIC) officer, expressed gratitude for the donation and reiterated the importance of good civil military relations in winning the hearts and minds of local communities.

"CIMIC has to coordinate activities between civilians and the army and support operations of the headquarters and the mission in general, so as to gain the support of the Somali population. We are not here only to fight but also to win hearts, in order to help Somalia get peace," Lt. Col. Bikorimana explained.