Many of the teacher, who had taken loans from saving groups and money lenders have since gone into hiding 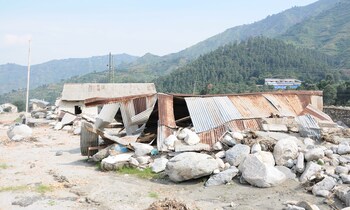 Besides the covid19 related lockdown that was announced in March, which affected every Ugandan, the people of Kasese district have also had to contend with extreme floods and landslides that struck twice in the month of May.

The situation is even more worrying for teachers in the district, as many of them have since lost their source of livelihood.  Some of the schools in the district were completely destroyed by the floods, while others were silted and rendered inaccessible. This was mainly in Kilembe area and Kasese town.

Many of the teachers, who had taken loans from saving groups and money lenders have since gone into hiding, for lack of a solution. Some say that their creditors have confiscated their ATM cards as a security to ensure they pay their loans.

To offer a glimmer of hope, the Uganda Teachers Co-operative Savings and credit (UTCSCU), in partnership with Microfinance Support Centre (MSC), has stepped up to buy off loans that many teachers were struggling with.

According to the chairperson of UTCSCU Mrs. Joan Asiimwe, since some of the schools were destroyed, the teachers are not sure if and how they will pay back the loans or even whether they still have jobs.

Asiimwe says the partnership with MSC comes at a reduced interest rate of 11% as opposed to the 24-28% they were paying to their previous lenders and will help the teachers overcome the choking loans.