In a mini reshuffle announced on Saturday afternoon, Byekwaso becomes the first female army officer to be appointed army spokesperson. 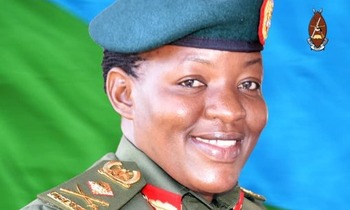 In a mini reshuffle announced on Saturday afternoon, Byekwaso becomes the first female army officer to be appointed army spokesperson.

Karemire on Saturday (August 1, 2020) confirmed the army changes. In a tweet Karemire stated, "Please join me to welcome Hon Brig Gen Flavia Byekwaso appointed the Defence Spokesperson following the end of my tour of duty. I have been assigned to EAC Secretariat as Defence Liaison Officer. I look forward to working on Integration as the solution for our strategic security."

Maj Gen Don Nabasa the former Commandant of the Special Forces Command who had been sent for further studies has been appointed the Contingent Commander-AMISOM, Brig Gen Emanuel Rwashande is the new Chief Civil Military Cooperation.

Byekwaso represents the army in the 10 Parliament having been elected in 2016. She was born on December 29, 1971, and attended St. Mathias Kalemba Senior Secondary School, in Nazigo, Kayunga District, for both her O-Level and A-Level.

She joined the army as a cadet officer in 2000. She is among the few senior female army officers in the army.