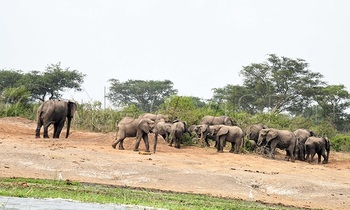 The animal was recently sighted by park rangers near Kazinga Channel in Queen Elizabeth National Park (NP) in Western Uganda moving with the herd but with the snare still stuck in its flesh.

According to UWA, commercial poaching for meat and ivory is still rampant in Queen Elizabeth and other protected areas especially in border areas with DR Congo, where criminals enter the parks using the porous border.

But the rangers were pursuing the animal and dart it for treatment, fearing it might die in the process.

Dr. Ludwig Siesert, one of the veterinary doctors treating animals in Queen Elizabeth NP said that they were still looking for the elephant after the first attempt to dart it last week proved futile.

He said that they trailed and sighted it moving with a herd of about 100 animals but it ran and mixed with others, moving deeper inside the thickets.

He said they came into close range but could not dart it fearing that other animals would remain behind and cause harm to the rangers.

Rangers on the team explained that in such circumstances, they would prefer to let the animal go and track it later because once the rest become violent, it would become dangerous.

The incident occurred at the time during the visit of the European Union (EU) delegation in the park recently.

The EU team, led by the head of delegation, Attilio Pacifici was in the area to commission the Simama Ranger Outpost in the Ishasha Sector near the Uganda-DR Congo border.

The outpost was part of the 1.2mEuros three-year project implemented in both Virunga National Park in DR Congo and Queen Elizabeth in Uganda.

It was intended to strengthen law enforcement, boost protection of wildlife against the rampant commercial poaching in the area.

Queen Elizabeth NP is home to over 2,900 bush elephants, boasting of almost half of the total population of elephants in Uganda, which makes it a unique tourism spot.

Speaking at the commissioning, Pacifici said that despite the different interventions, law enforcement in natural resources management still remained a big challenge world over.

He said the outpost was aimed at reducing poaching, safeguarding tourists who visit the area and promoting tourism activities and investments.

He explained that despite the key contribution of the tourism sector to national development, there were reports of growing incidences of illegal wildlife trade in Uganda.

He said unfortunately reports were indicating that Uganda was being used as a transit route and a source for wildlife trafficking.

According to Pacifici, the Uganda-DR Congo border was known as a crossing point to the illegal activities and it is one of the reasons why the EU funded the construction of the Simama ranger outpost through support to Transboundary initiatives in the Virunga Mountains.

The project was supervised by the International Fund for Animal Welfare (IFAW) in collaboration with the International Union for Conservation of Nature (IUCN) under Convention on International Trade in Endangered Species and the Monitoring the Illegal Killing of Elephants (MIKES).

Dr. Margret Driciru, a veterinarian and senior Monitoring and Research warden for Queen Elizabeth National Park said poaching was on the increase in the park and hoped the construction of the ranger outpost would go a long way to protect the animals.

She said some of the animals were straying into communities and efforts to erect electric fences became futile because they were expensive.