Leaders of civil society, Artisanal and Small Scale Miners and MPs from constituencies with mining communities on Tuesday expressed support to Opendi and government's initiatives to clean up the sector. 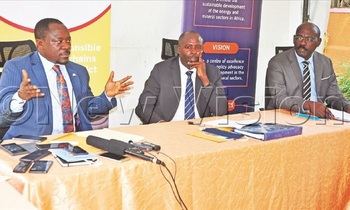 Uganda's mining sector has been brought into the spotlight after the state minister for minerals, Sarah Opendi, said certain individuals were threatening her for making bold steps to organise the sector.

Leaders of civil society, Artisanal and Small Scale Miners and MPs from constituencies with mining communities on Tuesday expressed support to Opendi and government's initiatives to clean up the sector.

Don Binyina, the executive director at the African Centre for Energy and Mineral Policy (ACEMP), called upon the public to support efforts to bring order to the mining sector.

"It is unfortunate that Uganda's mining sector continues to underperform despite having immense potential to contribute significantly to the country's resource basket," he said.

This was during a joint press conference held at the ACEMP offices in Bukoto, Kampala recently.

It was attended by leaders of the Artisanal and Small Scale Miners and Francis Mwijukye, the Buhweju County MP. Binyina said Opendi's efforts in cleaning up the mining sector are being undermined by people who are threatening her life.

He called on the energy and mineral development ministry to expedite the passing of the draft Mining and Minerals Bill to develop the mining sector.

Binyina asked the Government to fast-track the implementation of the regional certification mechanisms that enable the export of minerals, dubbed conflict minerals.

These minerals include tin, tungsten, tantalite and gold. The exploitation of these minerals in the region has been linked to violence, conflicts and human rights violations.

"Parliament should look into the operations of the Police Minerals Protection Unit.

The Inspectorate of Government, the State House Anti- Corruption Unit and the Uganda Human Rights Commission should investigate allegations of corruption, abuse of office as well as extortion by senior management of the Police Minerals Protection Unit," Binyina said.

Mwijukye said powerful individuals have taken over the mining sector but they were not remitting revenues from the minerals to the Government.

"The local communities are not benefiting from the mining sector. Those who are mining should be supporting community development through building schools, hospitals and roads. The powerful people are involved in human rights violations of local mining communities because they want their land and the minerals," Mwijukye said.

He said Parliament would expedite the passing of the new laws for the mining sector if the Executive can present them before the election cycle begins.

"The mining communities are being forced to migrate to urban centres because they have been chased from their land and mining sites. The Government needs to protect Ugandans from these parasites," he said.

John Bosco Bukya, the chairperson of Uganda Association of Artisanal and Small Scale Miners, said the new mining laws should be passed before Uganda goes into elections and a new Parliament comes into place.

Bukya said consultations have been made on the new mining legislations. He added that the artisanal and small scale miners have organised themselves into associations and registered themselves.

Phyllis Nankoma, the women representative of the Uganda Association of Artisanal and Small Scale Miners, said they had written over 200 letters to different ministries, departments and government agencies to help them but in vain.

In 2017, under a directive of President Yoweri Museveni, the Police Minerals Protection Unit was created to respond to the growing concerns about the country's mining sector, including land evictions, smuggling, child labour and gender abuses.

Jessica Keigombe, the Minerals Protection Unit commandant, said her unit is tasked with maintaining law and order in the mining sector, to protect minerals from being smuggled and ensure the Government earns revenue from the sector.