Dr Frank Nabwiso, the former MP for Kagoma County in Jinja, said Mwiru should have consulted widely before crossing to ANT. 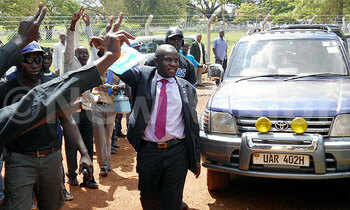 Members of the Forum for Democratic Change (FDC) party in Jinja district have said they are glad to see the back of Jinja Municipality East MP Paul Mwiru because he has not been loyal to the party. Mwiru is one of the two MPs who joined the Alliance for National Transformation (ANT) party on Tuesday.

The other MP is Gerald Karuhanga, who represents Ntungamo Municipality as an Independent. "My biggest point of departure has been on strategy and methods of work. I have contributed to FDC.

I joined ANT because it is a value-based party and based on respect for everyone," Mwiru said. However, Meddie Mbentyo, the FDC Jinja Central East councillor at the district, said it is good for Mwiru to leave the party.

Mbentyo said Mwiru's constituency might consider him as an opportunist come 2021 for having defected from FDC to ANT. ANT is headed by former FDC president Maj. Gen (rtd) Mugisha Muntu.

However, Dr Timothy Batuwa, who is planning to contest for Jinja South West MP seat on the FDC ticket in the new city, said Mwiru had betrayed them.

"I am disappointed that Mwiru quit FDC which groomed him into being a good leader and which stood by him when he successfully challenged Nathan Igeme Nabeta's victory in Jinja High Court and Court of Appeal," he said.

Dr Frank Nabwiso, the former MP for Kagoma County in Jinja, said Mwiru should have consulted widely before crossing to ANT. He, however, asked FDC to tread carefully on this issue.

While receiving the two MPs at the party headquarters in Kampala, Muntu, who was recently nominated as the ANT sole candidate for the 2021 presidential elections, said, "this is just the beginning" of a long journey ahead.

Currently, the law allows legislators to join another political party 12 months to the next elections without the requirement of first getting clearance from their original parties.