At the time of his arrest, Munanura was undergoing a refresher course in Ruhengyere Kiruhura district. 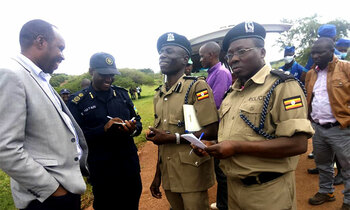 The Kigezi Regional Police Spokesperson Elly Maate has identified the suspect as RA 242371 Private (Pte) Onesmus Munanura, 23, who is attached to the 5th Division.

"Our officers got the suspect red-handed with the victim at Highland Hotel in Kabale Municipality, on Tuesday morning at around 9 am," said Maate.

He further revealed that the suspect is a resident of Kakatunda village Bukyinda ward Muhanga town council Rukiga district.

At the time of his arrest, Munanura was undergoing a refresher course in Ruhengyere Kiruhura district.

According to Police, the suspect has been living with the victim since Sunday last week.

"The girl is a resident of Kiyora village, Mwendo Parish, in Kitumba Sub County, Kabale district.

She went missing from her parents on Sunday and since then; a hunt for her whereabouts has been on," added Police.