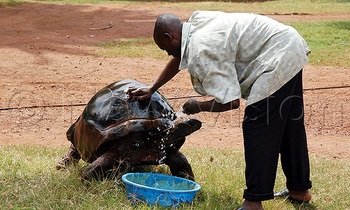 The World Animal Protection has launched a global campaign calling for an end to wildlife trade aimed at protecting wildlife and preventing future zoonotic pandemics.

The new campaign targets G-20 leaders to support a permanent wildlife trade ban, in the wake of new research that suggests that the coronavirus pandemic has origins in wild animals.

The pandemic, which has left over 4.6 million people ill and killed over 320,000, is thought to have originated from a wet market in Wuhan, China, where wild animals were sold.

Scientists suggest that the virus came from bats, and moved to humans via an intermediary animal, potentially a pangolin, the most illegally traded mammal in the world.

Tennyson Williams, the Country Director for the World Animal Protection says cruel multi-billion-dollar businesses were exploiting wild animals for profit at a high cost to the world.

"This campaign isn't just about wild animals being sold for food. It's much bigger than that, it's about greed and the commodification of wild animals at every level. We urgently need to persuade the G20 to take steps towards implementing a global wildlife ban to protect us from future pandemics. There is a need for coordinated, global action and this ban could save the lives of millions of people, animals and our economies," he said in a press statement.

The 15th meeting of Group of Twenty (G20) will convene from 21-22 November 2020, in Riyadh, Saudi Arabia under the theme, "Realizing Opportunities of the 21st Century For All".

The three key agenda items to be addressed under this theme are: "Empowering People, by creating the conditions in which all people - especially women and youth - can live, work and thrive"; "Safeguarding the Planet, by fostering collective efforts to protect our global commons"; and "Shaping New Frontiers, by adopting long-term and bold strategies to share benefits of innovation and technological advancement."

The G20 is made up of 19 countries and the European Union. The 19 countries are Argentina, Australia, Brazil, Canada, China, Germany, France, India, Indonesia, Italy, Japan, Mexico, the Russian Federation, Saudi Arabia, South Africa, South Korea, Turkey, the UK and the US.

According to Tennyson, the key lesson from the COVID-19 pandemic is that wild animals should be left to live where they belong, in the wild, and for humans to change their behaviour.

"If we don't purchase exotic pets or traditional medicine that contains wild animal products, and don't visit venues with performing animals, we will send a clear message that wildlife cruelty is no longer tolerable - for the animals, our health and the planet," he stated.

Way before the current pandemic, the animal protection body had been pushing for a total ban on wildlife trade to eliminate threats of future pandemics to our health and economies.

The activists warn that demand for traditional medicine has devastating consequences for many species of wildlife traded globally, including bears, which are poached and farmed for their bile

Each year, millions of wild animals are captured from their natural habitats and bred in cruel captive conditions to be traded around the world as pets.

Citing recent studies, the agency warns that 66% of African grey parrots that are poached die before they even reach international transit.

Approximately 11 million people each year pay to watch elephants perform tricks in Thailand, and 46 million people have paid to see dolphins at a venue at least once in the last 4 years.

According to the agency, prices of elephants used for rides have sky-rocketed to over $50,000, and a single dolphin can generate anything between $400,000 and $2 million per year for entertainment venues such as, SeaWorld.