Ricciardo to join McLaren in 2021 as Sainz replacement

Ricciardo, 30, will line up alongside Britain's Lando Norris, 20, at McLaren in 2021 after he leaves Renault at the end of this season. 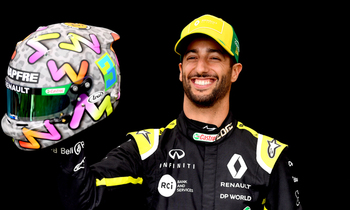 Australian Daniel Ricciardo will drive for McLaren in Formula One next season after signing a "multi-year" deal that will see him replace Ferrari-bound Carlos Sainz, the British team announced on Thursday.

Ricciardo, 30, will line up alongside Britain's Lando Norris, 20, at McLaren in 2021 after he leaves Renault at the end of this season.

Ferrari are also expected to announce the arrival of Sainz, who will take the place of Sebastian Vettel at Maranello next year after the four-time world champion announced this week he was leaving the Italian team.

"Daniel is a proven race-winner and his experience, commitment and energy will be a valuable addition to McLaren and our mission to return to the front of the field," said McLaren team principal Andreas Seidl.

"With Daniel and Lando as teammates, I believe we have two racers who will continue to excite our fans and help the team grow."

Ricciardo has won seven races and recorded 29 podium finishes since his F1 debut with the HRT team at the British Grand Prix in 2011.

However, he failed to muster a single top-three finish in his first season at Renault.

After the first 10 races of the coronavirus-hit 2020 campaign were either cancelled or postponed, Formula One hopes to open its season in Austria with back-to-back races on July 5 and 12.