The Briton, who is bidding to equal Michael Schumacher's record seven world titles, has been the dominant force in recent times, winning five of the last six drivers' championships. 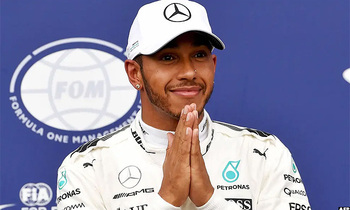 Mercedes world champion Lewis Hamilton pinpointed Red Bull, and not Ferrari, Thursday as his key early season threat ahead of the opening race of the year in Melbourne.

The Briton, who is bidding to equal Michael Schumacher's record seven world titles, has been the dominant force in recent times, winning five of the last six drivers' championships.

"I think it's the same, Ferrari and Red Bull," Hamilton said of who would pose the main threat to the all-conquering Mercedes this year.

Ferrari team principal Mattia Binotto said after pre-season testing that their new engine was "not as strong", but Vettel said it was too early to make assumptions.

"We'll see. I think we have focused on other areas and I think we'll find out this weekend, probably in qualifying conditions when everyone is trying to get to their maximum. That's when we will see where we are," he said.

The first practice session at Albert Park is scheduled for Friday at a race that has been overshadowed by coronavirus fears, with Hamilton saying he was "very, very surprised" it was going ahead.

"It's quite a big circus that's come here, it's definitely concerning for me," he said.

Hamilton did more laps at testing in Spain than any other driver and has taken every pole at Albert Park since 2014.

But he has won just once in that time, and it was Valtteri Bottas who took the chequered flag ahead of his teammate in Melbourne last year.

The Briton said he never liked using the word "confident", but he was happy with his team's build-up.

"We did leave (testing) with reliability issues, and I know the guys have been trying to move mountains over the last couple of weeks to make sure we arrived in the best shape possible," he said.

"I believe in all the hard work they have done, so we're hoping we start off on the right foot."