Benard Masereka, a resident of Nyakabugha village in Bugoye sub-county, told New Vision that the bridge connecting Bugoye and Maliba sub-counties at Nyakalengija had been swept away. 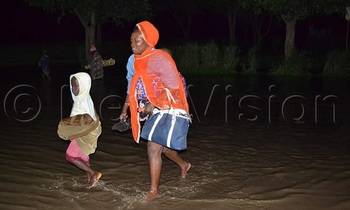 Thousands of residents are on the run again after Rivers Nyamwamba, Mubuku and Nyamugasani burst their banks again.  Seven years ago, the rivers killed several people and destroyed private and public property worth unspecified billions of shillings in May 2013.

The rivers started flooding at around 2:00 am Wednesday when the residents were woken up by the bomb sound of the rolling boulders.

Benard Masereka, a resident of Nyakabugha village in Bugoye sub-county, told New Vision that the bridge connecting Bugoye and Maliba sub-counties at Nyakalengija had been swept away.

The water had risen to the brim of the Nyamwamba bridge near the Kasese airfield by 4: 30 am

Some of the river water, which was flowing through the areas of Nyakasanga was about to cross over the Kasese-Fort highway as residents who had fled from their homes watched on.

Speaking on phone from Kilembe mines hospital, John Baluku, a long-serving St John's ambulance commissioner for the western region, said the patients had started scampering out of the wards but were calmed down.

Alex Byaruhanga, the Kilembe mines financial administrator, said the floods had cut off the road between Katiri and the company offices in Kanyaruboga, in the Bulembia division of Kasese Municipality.

"I can hear some of the residents shouting from the hill-sides," Byaruhanga said.

Byaruhanga said the flooding of River Mubuku had cut off the power source at Nyakalengija, plunging the Kilembe into a blackout.

Down in the usually vulnerable Karusandara sub-county, which lies below the Kasese-Fort Portal highway, residents who detected the flood early enough, had fled to Kabukero hill.

The Karusandara council general duties, Santos Tumwine said several villages including Kabaka and Nyabubare had flooded beyond the crossing.

"Some of the residents have fled to the sub-county headquarters," Tumwine said around.

Residents near Nyamugasani in Kyalhumba town have started shifting with their property to higher grounds," he said.

The Uganda National Meteorological Authority (UNMA) has been forecasting torrential rains in various parts of the country especially the Rwenzori, Elgon, Lake Victoria, and Kigezi regions.