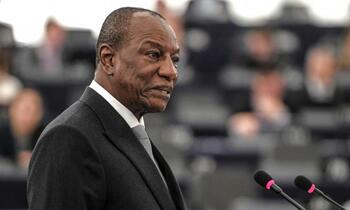 Guinea's President Alpha Conde has enacted a new constitution following a referendum last month on changes that critics fear are aimed at extending his time in office.

After months of tensions, Conde enacted the new charter by decree read on national television on Monday, the same day he approved a 292 million euro ($315 million) "economic response plan" to the coronavirus pandemic.

A former opposition figure jailed under previous hardline regimes, Conde made history in 2010 as the first democratically elected president in a country with a chronic history of military coups and turmoil.

Voters returned him to office in 2015 for his second and final five-year term under the current constitution, but critics say he has become increasingly authoritarian.

Conde argued that the constitution needed to be updated to usher in badly needed social changes, especially for women, with reforms including a ban on female genital mutilation and underage marriage.

His proposal was put to a referendum on March 22, with voters overwhelmingly backing a new constitution, according to the country's electoral body.

The new constitution still limits the president to two terms, but the opposition accused Conde of wanting to use the pretext of the new document to reset the counter to zero and seek another term in elections at the end of 2020.

The opposition boycotted the referendum as well as the legislative vote organised simultaneously.

The United States, European Union and France questioned the credibility of the vote.

It was held despite international protests and the appearance of coronavirus in the country.

Conde said on social networks that he had approved a plan to minimise the effects of the pandemic on the national economy and the most disadvantaged households.

A poor country despite its natural resources, Guinea has been severely tested in the past by the Ebola virus.

Among the measures announced to tackle the coronavirus, the state will pay the electricity bills of the poorest for three months, freeze the price of medicines and basic necessities during the pandemic and introduce free public transport for three months.