Machar identified the patient as a 29-year-old woman who arrived in South Sudan from the Netherlands via Ethiopia on February 28. 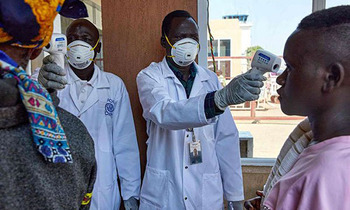 South Sudan reported its first coronavirus case on Sunday, one of the last African nations to confirm the presence of COVID-19 within its borders.

Machar identified the patient as a 29-year-old woman who arrived in South Sudan from the Netherlands via Ethiopia on February 28.

Her nationality was not given.

In a statement, the UN Mission in South Sudan (UNMISS) said the woman is a member of its staff.

She tested positive for coronavirus on Saturday after presenting herself at a UN clinic on Thursday.

"The Ministry of Health is leading a full investigation with the World Health Organization and the Center for Disease Control and Prevention including identifying and following up all the possible contacts and next steps," Machar said.

South Sudan has already closed bars, night clubs and shops, other than those selling food, and encouraged people to observe social distancing rules.

Borders have been shut and the country's international airport closed. A curfew is also in place from 8:00 pm to 06:00 am.

One of the world's poorest countries, South Sudan is woefully undeveloped. It has been wracked by a series of civil wars over decades, leaving it ill-equipped to fight the pandemic or provide even basic healthcare to its citizens.

The most recent round of civil war cost the lives of an estimated 380,000 people, forced millions from their homes and wrecked the already weak economy. It only ended with the appointment of Machar as vice president in February, rejoining the government of his foe President Salva Kiir.