The husband wanted sh1,200 to buy alcohol but the wife could only offer sh1,000. 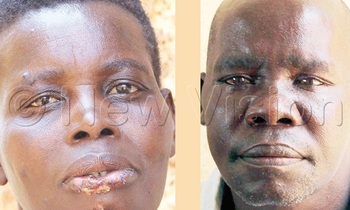 Michael Opio, a resident of Ararak B cell, Kaberamaido town council in Kaberamaido district, has been arrested for allegedly biting off his wife's lip over sh200.

The officer in charge of the district Family and Child Protection Unit of Kaberamaido, Janet Amuge Etoru, said Opio will be charged with assault.

Amuge said Anna Grace Ajuno appeared in their office and said her husband, Opio, fought her and in the process bit her lip.

Amuge said they immediately asked Ajuno to be rushed to Kaberamaido Health Centre IV for medical attention, where she was stitched.

The cause Ajuno said the husband wanted sh1,200 to buy alcohol but she could only offer sh1,000, which she said sparked off the fight.

"When I gave my husband money which was less by sh200, he pounced on me, threw me on the floor and started beating me. In the process of fighting, he bit my lower lip," Ajuno narrated.

She said her husband accused her of deliberately refusing to give him the full amount. She said she was rescued by her co-wife, Juliet Inebe, who came after she made an alarm.

Inebe said upon hearing an alarm, she thought it was a different man attacking Ajuno. She added that on reaching the scene, she saw Ajuno bleeding from her mouth.

Amuge said a case of assault has been opened at Kaberamaido Central Police Station against Opio.

Opio said he acted under the influence of alcohol. He regretted the incident and asked to be pardoned by his wife.

Amuge blamed Opio for the violence against his wife. "How do you fight your own wife to the extent of biting off her lips over just sh200?," she asked.

"This is not good news at all. Couples should be able to understand each other and personal matters should be resolved privately with mutual understanding," Amuge added.

Amuge said considering their situation, she was considering releasing Opio on Police bond so that he can attend to his wife after.