"The accused and others still at large knowingly and unlawfully caused the computer device, to wit MTN SIM cards to intercept calls in Uganda on the MTN network," 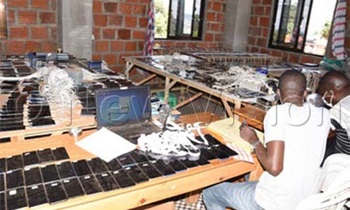 KAMPALA - Thirty-seven Chinese nationals, including five women, all residents of Kireka in Wakiso district, have been charged with phone tapping and theft.

They have been charged with four counts under Uganda's Computer Misuse Act (CMA) 2011. They are accused of abetment of unauthorised use of computer services contrary to section 21(1) & 15(c) of CMA.

It is alleged that between October last year and March this year, at Kireka, Kamuli Road, the accused and others still at large accessed information unscrupulously.

"The accused facilitated the commission of the offence of unauthorised use of computer services knowingly and unlawfully accessed 1,895 Airtel SIM cards.

This was without authority for the purpose of obtaining directly or indirectly Airtel telecom services," the charge sheet stated.

The prosecution also says the accused, at the same place within the same period, accessed 223 MTN SIM cards without authority.

This was allegedly for the purpose of obtaining directly or indirectly MTN services. "The accused and others still at large knowingly and unlawfully caused the computer device, to wit MTN SIM cards to intercept calls in Uganda on the MTN network," prosecution alleges.

They are further accused of committing a similar offence, using Airtel SIM cards, to intercept calls in Uganda on the Airtel network.

On another charge sheet, three of the 37 are charged separately with the offence of conducting business without a trading licence, which is a breach of section 8(1) of the Trade Act.

It is alleged that on March 19 in Kireka, Lin Shao Sheng, You Jing Dao, Lijia Zhao, and others still at large illegally operated a phone sale business, computer scrap dealing and disassembling mobile phones as well as computers.

In contravention of the Trade Act, Sheng is alleged to have illegally processed food packaging for trade purposes.

The trio is also battling the offence of possessing stolen property contrary to section 315(1) of Penal Code Act.
It is alleged that the trio was on March 21 this year found in possession of a stolen Umeme meter number U203985.

The trio is accused of being found in possession of water meter number ISO 4064, which Ndyamuhaki suspected was stolen property.

The trio is again accused of being found with mobile phone and computer motherboards, which search officer ASP Deo Wamakale suspected were stolen.

Five of the 37 accused are also battling crimes resulting from actions contrary to the Uganda Wildlife Authority (UWA) Act 2019.

Dao, Huang Jian, Mao Xue Ming, Mao Ya Jan, and Li Ren Zha, were allegedly found with tortoise shells and pangolin scales in breach of sections 36(1) and 71(1)b of the UWA Act 2019.