Kunsa, who is currently serving 9-years-jail term had sought for bail, pending appeal on grounds of ill-health and advanced age (61). 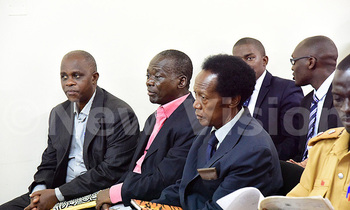 KAMPALA - The Court of Appeal has declined to grant bail to the former commissioner in charge of compensation at the Public Service Ministry Stephen Kiwanuka Kunsa.

Kunsa, who is currently serving 9-years-jail term had sought for bail, pending appeal on grounds of ill-health and advanced age (61).

A medical report submitted to court by Kunsa indicated that he had developed a stroke and that such conditions cannot be adequately handled in Luzira Prisons because speech physiotherapists who deal with them are not available in Uganda prisons.

Kunsa also submitted that he had a fixed place of abode in Nakinyuguzi zone LC1, Luwafu, Makindye division and substantial sureties.

Kasule ruled that Kunsa cannot base his application for bail pending appeal upon the pendency of Court of Appeal criminal case because he is not the appellant in the said appeal.

The judge noted that there were no exceptional grounds and or unusual reasons that the applicant had advanced for him to grant him bail pending appeal, adding that this should be adduced to support the case of the applicant.

The trio in 2016 were convicted by the Anti-Corruption Court in Kampala of abuse of office, false accounting, causing financial loss, diversion of public funds and conspiracy to defraud.

The conviction was in relation to the irregular budgeting of sh88.2b during the financial years 2010/2011 and 2011/2012 as civil servants contribution to the National Social Security Fund (NSSF) well knowing that Government workers are not required to contribute to NSSF.

Following the conviction, Jimmy Lwamafa, the former Permanent Secretary was sentenced to a seven-year jail term, Christopher Obey, the former Principal Accountant 10 years and Kunsa 5 years. They were also ordered to compensate Government sh50b out of the diverted money.

Being dissatisfied with the judgement, the trio challenged their convictions and sentences at the Court of Appeal through their lawyers Evans Ochieng and Nsubuga Mubiru.

In their appeal, the convicts argued that Justice Lawrence Gidudu erred in law and fact when he failed to properly evaluate the evidence on record and came to a wrong conclusion.

However, a panel of three justice comprising of Deputy Chief Justice Alfonse Owiny Dollo, Elizabeth Musoke and Percy Tuhaise in February this year, upheld the convictions of the trio and reduced their sentences.

Lwamafa's sentence was reduced from seven to four years, while Kunsa from five to three years. But the justices declined to reduce Obey's sentence saying there was no justifiable argument for quashing the sentence.

According to the justices, the trial judge did not consider mitigating factors for Kunsa, who was sick at the time of his conviction whereas Lwamafa' s sentence was found to have been harsh and excessive.

The Justices said the lower court gave the convicts a very lenient compensation order and observed that they would have ordered for more compensation if the Directorate of Public Prosecutions had appealed against the trial judge's order to refund only sh50b.

However, on December 21, 2018, the three former ministry of public service top officials were also convicted along with city lawyer Bob Kasango over theft of sh15b that was meant for pensioners.

Subsequently, Obey was given 14 years while Lwamafa and Kunsa each got nine years. They have since appealed against the sentence and conviction.