Women rights activists are rallying for more swift laws to make it easy for women to access credit for financial independence. 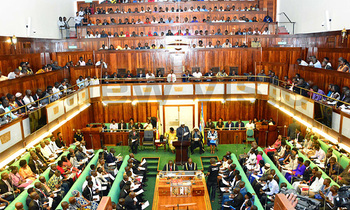 KAMPALA - Women rights defenders have pushed for the speedy passing of all pending gender-related bills before the country conducts the 2021 general elections.

Activists are arguing that spaces that facilitate women freedom are fast-shrinking despite efforts by the government to develop various emancipation frameworks.

Under the umbrella of Uganda Women's Network, the groups want bills such as Sexual Offences Bill, Marriage and Divorce Bill and Succession Amendment Bill passed into law.

They say these pieces of legislation, plus other policies, are vital tools for a violence-free society for women and girls.

The group, including the Uganda  Women  Network (UWONET) Secretariat, Girls  Forum Uganda and Quiin Abenakyo Foundation, conducted a 'Safety Walk' tour through the slum area of Kikubamutwe in Kabalagala in celebration of the recently held International Women's Day.

The activists rallied for more swift laws to make it easy for women to access credit for financial independence.

"Look at residences in here [in Kikubamutwe]. They are  mere havens  for drug abusers and hideouts for criminals, unsafe for girls and women," said Sandra Komuhimbo, UWONET's head of advocacy.

"The passing of the Sexual Offences Bill and many other related bills could protect the girls and women from potential sexual violence," she added.

Komuhimbo (left) spoke of the need to pass the pending gender-related legislations. In the picture, she is flanked by other activists, including Esther Namboka of GAFI (2nd-left) and Quiin Abenakyo (white top)

According to Komuhimbo, successful enactment of laws to harmonize marriage and succession would position women in a more independent perspective to defend their rights across both social and economic dimensions.

On her part, 2018 Miss World Africa Quiin Abenakyo called for more engagement with boys and men - chief perpetrators of sexual violence - for  a more sound solution to such acts.

The Sexual Offences Bill was first tabled in the 9th Parliament in 2015. It has been at committee stage until recently, when it was resolved by the Speaker that it it rewritten and retabled after numerous reforms to its detail.

This piece of legislation was moved by Mbarara Woman MP Kajungu Mutambi.

It aims to amend the Succession Act, Cap 162, to match the related provisions of the Constitution, and other globally accepted rights standards. This is by creating succession gender equality in relation to Articles 21 and 33 of Uganda's Constitution.

However, while at committee stage, Government, through the Attorney General, expressed interest to take it over while presenting a number of other bills.

This bill was tabled in 2009 and seeks to reform and consolidate the law relating to marriage, separation and divorce. It also seeks to provide for the types of recognized marriages in the country and marital rights and duties.

Late last year, however, Government sought for more time to consult over the  controversial bill that has stayed on Parliament's shelves for over ten years, after spirited resistance from various stakeholders.