But he is confident his troops will finish the job in Masindi. 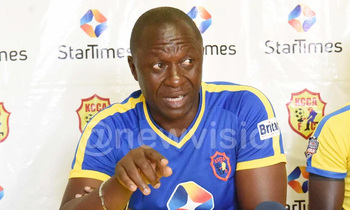 STANBIC UGANDA CUP ROUND OF 16


Ahead of their Stanbic Uganda Cup round of 16 tie against Doves on Thursday away in Masindi, KCCA head coach Mike Mutebi is frustrated by FUFA and the national team head coach Johnathan McKinstry for denying his players to return to the team for this game.

"I am very disappointed by FUFA and their national team coaches, Johnathan McKinstry and Abdullah Mubiru for not allowing my players to come and join us for this game," he said.

Mutebi also wondered how the two coaches who are technical in this area can allow FUFA to go ahead and influence this season's calendar.

He also believes that if the calendar had been properly followed, games of this round would have been played earlier before the team began preparations for the Africa Nations Championships (CHAN).

The KCCA players that Mutebi was talking about are Julius Poloto, Herbert Achai, Mustafa Kizza, Samuel Kato and Charles Lukwago, although he is injured.

But despite all these disruptions by FUFA, the tactician is confident the young stars he has added in his squad and the return of Gift Ali and Musa Ramathan from suspension will help his side to progress to the last-eight.

"I am confident that the available players have enough capacity to play and send us to the quarter-finals."

Some of these youngsters are from the KCCA Junior team (U-17): Simon Mukisa, Jerome Otim, Pius Ssebulime, Elvis Mwanje and Ibrahim Juma.

The hosts Doves are in the relegation battle to stay in FUFA Big League Rwenzori group, where they are lying at the basement of the nine teams with six points from 11 matches.

They beat fellow Big League side Water to reach this round while KCCA knocked out Bukedea Town Council.