Uganda's U-17 women's team coach Ayub Khalifah voices his confidence ahead of the return leg against Tanzania. 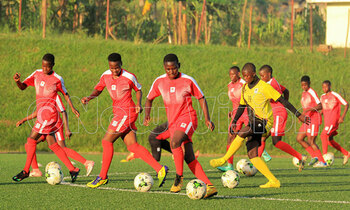 Uganda's U-17 women's team coach is highly confident that his side will be able to overturn their first-leg deficit when they take on neighbors Tanzania in the first round return leg of the 2020 FIFA U17 Women's World Cup Qualifiers this Saturday at Lugogo.

Aisha Masaka scored twice for Tanzania after Fauzia Najjemba had given Uganda an eary lead when the two sides first met.

"The spirit is right and the mood is high. They (players) want to change the result of the first game and want to win to go to the next step," said coach Ayub Khalifah.

"As we prepare for the decisive return leg, I am impressed by the spirit of my players and attitude in training. The girls are responding very well. We have tried to correct the mistakes from that match as well as concretize our attack because we will need the goals."

He added: "It is very important for my players to be confident.

Uganda have yet to beat Tanzania in women's football across all competitions.

Tooro Queens came from a goal down to defeat She Maroons 2-1 as they opened up a three-point gap in the Victoria Group of the FUFA Women Elite League.

Millicent Mwanzi had earlier opened up a lead for She Maroons before Joan Ainembabazi and Violet Kyererezi bounced back to score two goals as Tooro moved to 17 points, three above second-placed Dynamic that lost 3-0 to Bungaruguru.

In the Elizabeth group, leaders Makerere University defeated Amuria 4-0. Sharon Namatovu, Viola Namuddu, Rebecca Nakasaato and Amina Nababi each had a goal for Makerere, who on top with 23 points, four above Asubo Gafford Ladies that were not in action and have a game in hand.

Meanwhile, KCCA FC Soccer Academy remained on course on winning their first title of the FUFA Junior League following a comprehensive 7-1 victory over Police in the Treble group over the weekend at Progressive SS Kauga in Mukono.

The Lugogo-based side saw Jerome Otim, Sunday Opio and Elvis Mwanje each score a brace while Oscar Mawa added the other as they moved to 45 points.

Second-placed Bright Stars, who thumped URA 8-0, are in second place on 39 points.

In the Hattrick group, leaders Busoga United (33 points) played to a 1-1 draw with Vipers at St Mary's Stadium in Kitende.