An activist involved from the start of the protest movement that ended Bashir's three-decade rule last April, Badreddine will lead a demonstration in front of the Justice Ministry on Sunday to mark International Women's Day. 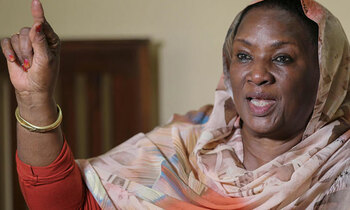 Sudanese women were at the forefront of the protests that toppled autocrat Omar al-Bashir but 11 months on, activists are disappointed at a lack of progress on women's issues.

"Nothing has been done to meet women's demands," said Zeineb Badreddine.

An activist involved from the start of the protest movement that ended Bashir's three-decade rule last April, Badreddine will lead a demonstration in front of the Justice Ministry on Sunday to mark International Women's Day.

Almost 30 years after being fired under Bashir for her "progressive ideas", she has also returned to teaching.

But despite the toppling of the Islamist regime, she says the new government lacks female representation.

When Prime Minister Abdalla Hamdok formed his government in September, he vowed to improve the situation for women despite the country's economic and social difficulties.

He allocated four of 17 ministerial positions to women, including the key foreign affairs portfolio. A woman was also named head of the judiciary.

But the country's top authority, the joint civilian and military Sovereign Council charged with overseeing the transition to civilian rule, only has two female members out of 11.

"If women had better representation, they would have more voices to defend their cause," said Badreddine.

Under the Islamist regime, a notorious "public order" law was used to have women publicly flogged or imprisoned for "indecent" dress or for drinking alcohol, seen as "indecent and immoral acts".

Hamdok's government last November revoked the legislation -- but many other discriminatory laws remain in place.

Judges in Sudan also have powers to judge whether or not a woman has been raped, which can sometimes lead to rape victims being prosecuted for adultery.

Lawyer and women's activist Inaam Atiq takes aim at a 1991 personal status law, which she says "is causing the suffering of thousands of women across Sudan".

She says the legislation, inspired by Islamic law, allows 10-year-old girls to be married against their wishes.

"This text must be urgently amended and this can be done without touching Shariah (Islamic law) principles," she said.

Another law forbids women to travel abroad unless they have permission from a male guardian -- a measure that even ultra-conservative Saudi Arabia has abolished.

"My guardian could be a younger brother that I raised, or even my son," Atiq said.

Activist Manal Abdelhalim expresses amazement at "voices, including those of some women, who say that the issue (of women's rights) is not a priority and that it can wait".

But Atiq is more hopeful.

"We need immediate measures, and I think that the justice ministry and the government understand the situation," she says.

"I am optimistic about the possibility of taking steps in the right direction."