Opio said the elephants carried Otim from his home to the latter's home. As they tore him, Opio thought they were fighting, only to realise after they had left, that they were tearing Otim 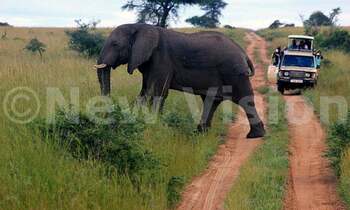 Stray elephants from Murchison Falls National Park in the early hours of Thursday morning attacked and killed a peasant at his home in Oyam district and dismembered the body.

Richard Otim in his 60s is said to have heard the elephants destroying his bananas and came out to check, but one that was just near his doorway grabbed him as he tried to dash back inside, dragged him about 30 metres away and crushed him to death.

According to a neighbour, another elephant joined, and they tore the peasant to pieces, dismembering him.

The herd of elephants comprising of mainly young ones was returning to the park as they destroy crops along the way.

Alex Opio, a resident of Amati A village, Juma parish, Kamdini sub-county where the incident happened, said it was around 5:40 am, when the herd of elephants attacked Otim.

Opio said the elephants carried Otim from his home to the latter's home. As they tore him, Opio thought they were fighting, only to realise after they had left, that they were tearing Otim. They found some body parts thrown away and all internal organs splashed out.

Jimmy Okello, 25, also from the same village said the elephants have frequented the area. He said the trenches dug last year to deter them have not been of help at all.

Okello said elephants have killed five people in the area, two from Amati A village in the last few months.

Opio on his part said their children cannot go to schools early because of fear of being attacked by animals. He said not only elephants are a problem, but some people also get mauled by crocodiles when they go near River Nile.

Kamdini sub-county chairperson Sam Ogwang Alunyu has condemned the perpetual disturbance of his people and called on the government to act immediately.

The chairperson said they had hoped that the electric fenced ordered by the President would be a permanent solution to the problem, but they are wondering why the construction has not started.

Ogwang said in the last three years, 19 people have been attacked and killed by stray elephants in Kamdini sub-county alone. 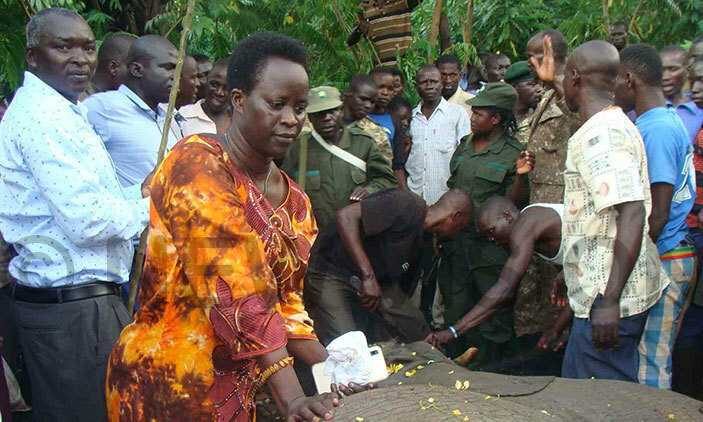 Bosco Ogwang Atoli, Kamdini LC V councilor, says the government should consider a permanent solution to the problem of elephants crossing to community farmland. He said the law of compensation of victims should be operationalized.

Goretti Otekat, Warden Law Enforcement for Karuma Wildlife Reserve said they have heard about the incident but could not comment because she still had to get the details.

Victor Saasi Kule, Oyam district police commander confirmed the incident, saying the elephant had left the young ones behind and came to check only to land on the man and attacked him.

He said postmortem was done and the body handed over to relatives for burial.

Oyam Woman MP Santa Alum Ogwang said the issue of elephants disturbing her community is a thorn in the flesh not only in Oyam but all the districts surrounding National Parks in the country.

She said after getting the report and seeing the gory photo of the victim, she raised the issue in Parliament as an issue of national importance.

She is appreciative that the line minister responded to her concern and promised that an electric fence will be put in place. She said this should be put in place immediately.

Alum is also concerned about the issue of compensation now that the law was passed.