Victory in the Lugogo derby would have buoyed KCCA to within a point of title-chasing Venoms, but they were frustrated by a Proline side determined to avoid the drop. 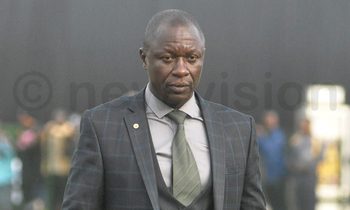 
KAMPALA - Once again, defending champions KCCA squandered the chance to make up enough ground to facilitate their tightening of the grip on the Premier League title.

After being held at home by Proline on Tuesday, Mike Mutebi's side is left exposed, leaving the door wide open for table leaders Vipers to open up a six-point gap at the summit when they play Wakiso Giants on Friday.

Victory in the Lugogo derby would have buoyed KCCA to within a point of title-chasing Venoms, but the Kasasiro Boys were left frustrated by a Proline side desperately fighting against being sucked down into second-tier football.

A point, though, lifted the strugglers off the floor of the table into the second-bottom spot, with Tooro United, who now have a game in hand, slipping to 16th place.

KCCA came into the game as favourites to win the tie and so Proline will view a draw as a point gained rather than two lost.

While they are not spared yet the anguish of languishing deep in the unwanted side of the table, a successive win and a draw will do well to ignite their sense of belief that they can still survive the guillotine.


Against their more illustrious opponents in a derby punctuated by a drab opening 45 minutes, Proline battled with gritted teeth all the way to the very end, and could have made their solidity pay off with a stoppage time winner.

KCCA will certainly rue missed chances, albeit being few and far between, in a game that was deficient in invention, penetration and precision. Proline, too, will not be spared the critical card of profligacy. Opportunities came their way but they failed to turn them into goals.

There was hardly anything to report home from a lethargic opening 15 minutes, but with the likes of Ibrahim Sendi trying out their luck towards the KCCA goal, the contest inevitably opened up.

Rogers Mato was busy too, and once drew Samuel Kato into a challenge that ended with the KCCA defender going into the referee's book for a foul.

Ali Mwirusi, starting in place of injured first-choice keeper Charles Lukwago, was forced into a save from an adventurous but tame effort by Hamis 'Diego' Kizza, shortly before Proline's Joseph Mandela became the second player to be booked in the game.


As half time approached, there was a growing sense of a goal waiting to burst out of the gates - and the spectators were almost treated to one when Bright Anukani's rasping effort whispered over the bar. Herbert Achai made a crucial block to Hakim Kiwanuka's effort as the opening half conclusion offered a sneak peek into a potentially high-octane second half.

In a duel of a top side and a bottom team, expect fireworks. In fact, KCCA returned from the break determined to hit the ground running, and nearly underlined their intent a minute into the second stanza with a Moses Aliro strike, but his effort missed the target. He would later be substituted Musana Hassan.

Erisa Ssekisambu also came close, with Shafik Magoola producing a fine save to keep out his fierce shot.

The holders gave a much better account of themselves in the second half but their redemptive attitude was matched with Proline's battling spirit, and on an uncharacteristically off day for Julius Poloto, both sides had to settle for a point each despite the visitors' late charge that saw Noordin Bunjo inch closer to hitting the winner.

The emoji caption on KCCA's Twitter post at the end of the game was very much indicative of a case of pondering what could have been in a game they should have put away with relative ease.

Lawrence Tezikya scored the only goal of the game from the penalty spot. Kyetume remain in ninth on 30 points.