IUEA and Busitema come into Friday's clash on the back of opening victories. 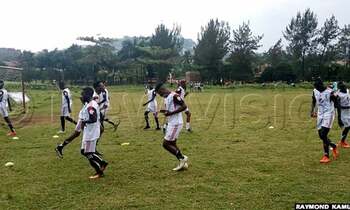 
International University of East Africa (IUEA) will be seeking to extend their winning run when they take on Busitema University Friday in Group C of the Pepsi University Football League.

IUEA picked up their first ever win in the competition in a surprise  2-1 home victory over two-time champions Kampala University in their opening game last week.

The result saw IUEA move top of their group, a spot coach Dennis Latim is keen to keep.

"It is still too early to be excited about the position on the table, but obviously we are happy to be on top and we want to remain there.

"Although many people were surprised by our win, I was not because we played Kampala University last season and both games, home and away, ended in goalless draws. So I knew we had a good chance to win against them and I am happy the boys took that chance," said Latim.

"It was a very important win and it has boosted our confidence as we head to Busitema."

Busitema coach Muganga Stanley is similarly confident ahead of the game after a late goal by Isaac Mukuba saw his side secure all three points against UMU.

"It was a tough game against UMU and we were happy with the result," he said.

"It was our first game and we were not fully prepared, but we did play well, managing to hold off UMU and when we got our chance, we took it."

Muganga's side are keen on sustaining the momentum.

"We hope to build on that win with another victory, which will go a long way in boosting our chances of making it to the knockout stage. So our focus is on winning and we are fully prepared and confident," he said.

After Friday's game, action will continue over the weekend, with Kyambogo University hosting Mbarara University and University of Kisubi hosting Kabale University.