He was influential in the 2017/18 league-winning squad under Portuguese tactician Miguel da Costa. 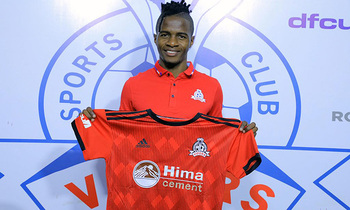 Vipers' title chase has been boosted with the return of Milton Karisa after a spell with Moroccan outfit Mouloudia Club Oranais on a one-year deal.

Karisa, who received his International Transfer Certificate (ITC) to feature for the Venoms, left Kitende to join the North African club in September 2018 after 20 months in a Venoms Jersey, having scored 15 goals in 48 appearances.

He was influential in the 2017/18 league-winning squad under Portuguese tactician Miguel da Costa.

During his stay at Mouloudia, Karisa managed to score four goals in the 22 appearances he made.

He made his Vipers debut on February 7, 2017 in a contested Wakiso derby versus Lweza in a 2-0 win at Namboole, but had to wait until September the same year to score his first league goal against former employers BUL FC thus kickstarting a successful stint at Kitende.

Karisa scored his historical goal at the newly opened St Mary's Stadium in a 1-0 win over visiting South African side Platinum Stars in the CAF Confederation Cup.

His clearance is a welcome boost as Vipers prepare to take on KCCA in the title clash next week on Tuesday at St Mary's Stadium in Kitende.

The Venoms are top of the standings on 49 points, five above second-placed KCCA.