Express hold a rich history in the competition, having won it 10 times - and are joint record-holders with KCCA. 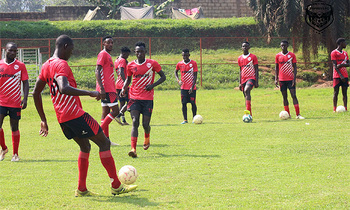 
Just after one game in charge of the Express, head coach Wasswa Bbosa restored smiles to the frustrated fans with that 1-0 away win in the league to Onduparaka last Friday.

Can he keep up with that impressive start when he faces the prison wardens, Maroons, at Kavumba Recreation Grounds in Wakiso today in the Uganda Cup Round of 32?

Express hold a rich history in the competition, having won it 10 times - and are joint record-holders with KCCA.

It is expected to be a tough encounter, given that Maroons coach Douglas Bamweyana will be facing his former employers.

He resigned his position as Express head coach in 2017. At the time, he felt club administrators and fans made life difficult for him during his tenure. So he has plenty to prove when the two sides meet today.

Express reached the Round of 32 after thumping third division side St Mary's Nabweru 3-0.

After a goalless regular period against another third division side Young Elephants, Maroons went on to win 4-1 on penalties to progress.

The winner of today's duel will advance to the last-16.

The last time out in the Stanbic Uganda Cup we scored 4️⃣ past Lugazi Municipal FC.

It will be a huge ask for the Mbarara-based side to dare take on on-form URA, who have not lost a game this year.

Nyamityobora recently lost their head coach Alex Isabirye Musongola, who crossed over to the topflight side Kyetume.