According to the Food Agricultural Organisation (FAO), locusts swarms can move 150 kilometers (about 90 miles) a day. 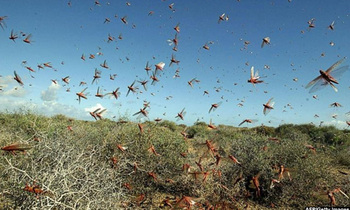 HOIMA - Lake Albert was previously known as "Mwitanzige" by the Banyoro and Batooro. In 1864, explorer Sir Samuel Baker found the lake and renamed it after Prince Albert, consort of Queen Victoria.

In the 20th century, former and deceased Zairian President Mobutu Sese Seko temporarily named the lake after himself.

Mwitanzige is a Runyoro terminology to mean killer of Locusts.

"The Lake was called "Mwitanzige" because when locusts (Nzige) attempted to fly over it, they perished.

Erasito explains that when the locusts attempted to move southwards to Congo and saw Lake Albert that connects Uganda and Congo, they thought it was a desert and since they had got tired, they ended up there under the premonition that they are resting on the grass hence perishing.

According to the Food Agricultural Organisation (FAO), swarms of locusts can move 150km (about 90 miles) a day. This means locusts could not easily cross Lake Albert which is about 160km wide.

"Decades ago, locusts used to frequent the lake," narrates Ashraf Nyorano Mugenyi, 68, a resident of Butanjwa village in Hoima district.

Mugenyi was 11 years in 1955 when locusts invaded Lake Albert and surrounding areas.

He said when the locusts tried flying over Lake Albert, most fell into the Lake Albert while others fell at the shores in Kaiso-Tonya in Buseruka sub-county, Hoima district.

Mugenyi, who also doubles as the official entertainer of the Omukama of Bunyoro Solomon Gafabusa Iguru, says from Buseruka, the locusts moved to Hoima town.

He elucidates that trees along Karuziika palace and Rukurato road were severely ruined by the locusts.

"People were struggling to kill the locusts. They ate them but they were overwhelmed because they were a swarm,"

"The young locusts destroyed grass and crops on the ground because they could not climb up the trees," Mugenyi explains.

As part of the solution to curb locusts' invasion, people dug trenches to trap the young locusts that had ravaged crops and grass. People later collected dried grass and banana leaves and set them on fire.

Although measures were put in place to curb them, Mugenyi said they were fighting a losing job until the colonial government intervention.