Vipers Kajoba starts with draw away to Mbarara 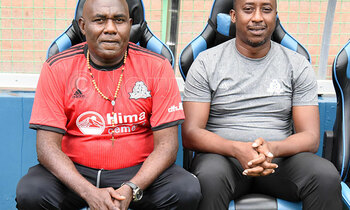 A goalless draw is not what Vipers Coach Fred Kajoba expected on his debut as Vipers' title ambitions were dented by Mbarara City in Bombo on Tuesday.

Vipers looked motivated and determined but failed to break the hard fighting Mbarara, in the end-to-end encounter.

Mucureezi, facing his former side since leaving them early this month was marked out of the game by Brian Aheebwa with Mbarara captain Hillary Mukundane also ensuring his side went back with something.

The Venoms have now gone three matches without a win. But they remain top of the standings with 43 points, with their immediate challengers KCCA FC, two below them. Mbarara is eighth on 23 points.

Elsewhere, Sadat Anaku and Erias Ssekisambu each had a goal each as KCCA beat Kyetume 2-0 in Jinja while Tooro United played to 1-1 draw with URA in Fort Portal while Onduparaka defeated Busoga United 2-1.

The league will resumes on Wednesday with SC Villa hosting Express in Bombo in the biggest football derby in the country.  BUL will face Wakiso Giants in Njeru while Bright Stars will battle Maroons at Kavumba.