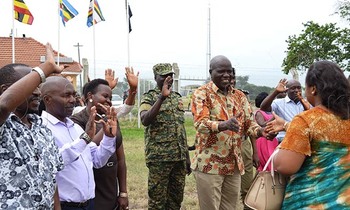 After touring Kasese for twelve days, the Nyabaghole (Queen) of the Obusinga Bwa Rwenzururu (OBR), Agnes Asimawe Ithungu, smiled her way back to Kampala on Monday afternoon.

To see her off were some Rwenzururu officials led by the institution's acting Prime Minister, Gad Baluku Mbayahi Bakwanamaha and the district security committee led by the Resident District Commissioner, Lt Joe Walusimbi respectively.

During her visit, she held public rallies, met some widows of the 2016 clashes, Rwenzururu cultural leaders, representatives of the Muslim Community and attended prayers at the Anglican, SDA and Catholic churches, conveying a peace and reconciliation message from the OBR leader, Charles Wesley Mumbere. 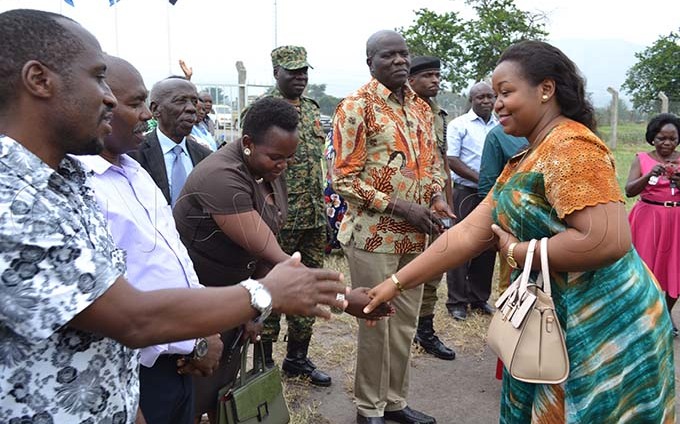 Rwenzururu and government officials bid farewell to the kingdom's queen Agnes Asimawe Ithungu before she flew out of Kasese after her 12-day official tour of the district Monday. Pix by John Thawite

Since his arrest during the security raid on his palace on November 27, 2016, Mumbere, along with some 200 of his subjects, faces various counts including treason, murder and attempted murder.

More than 100 people, mostly the Royal Guards and sixteen police officers died in the incident.

He and his family live in a restricted house in Kampala and he is prohibited from visiting his kingdom.

According to the Nyabaghole, Mumbere has, however, embarked on a peace and reconciliation campaign through dialogue with government, using the Prime Ministerial Commission (PMC), currently care-taking the kingdom affairs.

Two weeks ago, Mumbere sent his wife to convey his peace message to the Rwenzori region during which she visited Kasese.

"I am very happy that after more than three years out of touch with my people, I returned home and had a very peaceful visit," she said in a brief interview with the press at the Kasese aerodrome as the military chopper roared outside.

She lauded the government for having facilitated her visit to Kasese and the residents for overwhelmingly receiving her.

"Ever since I arrived home, I have felt at peace and I realised that my people had been thirsting to see me," said the Nyabaghole who fled Kasese in 2016.

She only returned to Kasese in august 2018 to mourn her father, late Leo Baluku, of Kyamuduma II village in Mahango sub-county. 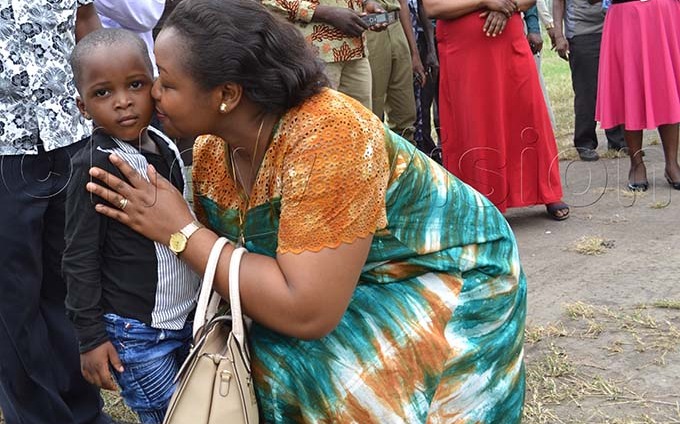 The queen urged the resident to embrace Mumbere's call.

But I urge everyone in Kasese, Rwenzori and Uganda in general to embrace the peace efforts," she said.

In his message, Mumbere also saluted President Museveni and the security agencies in the region for restoring peace in the hitherto embattled Rwenzori region.

Mumbere, however, distanced himself from a petition aimed at dragging the President to the International Criminal Court over the November incident.

According to the RDC, some politicians in Kasese have been circulating forms in the population soliciting signatures to affect the petition, claiming that Mumbere was behind the move.

Mumbere also condemned allegations that he intended to convert the Rwenzururu kingdom into a separate state, the Yiira republic, meant to annex parts of Western Uganda and the eastern Democratic Republic of the Congo.

"The people behind these allegations are enemies of Rwenzururu," Mumbere said in his message delivered by the Nyabaghole.

Following the incident, an unknown number of the Royal Guards have since lived hiding, some reportedly in the D.R. Congo, fearing for their lives.

During a peace campaign by the Busongora development Forum last year, some 87 managed to come out.

Mumbere urged those still in hiding to also come out and report to the office of the RDC and enjoy the prevailing peace.

Mumbere said he and government had agreed to designate Major David Bwambale, who hails from Kasese, to coordinate the Royal Guards who surrender.

"No harm will come to you. There is no way your king can lure you into something that will harm you," Mumbere assured them.

He said he had opted for a peaceful solution to the conflicts that have strained the relationship between his kingdom and central government.

He revealed that both parties had instituted a 10-member dialogue team to pursue peace and reconciliation.

Speaking to the media shortly after the queen's departure on Monday, the acting OBR Premier, Mbayahi, said her visit was a boost to the peace and stability in the Rwenzori region.

He lauded the government for having accorded her a dignified status by flying her in and out in a government helicopter.

"Given the manner in which government has handled her, we are optimistic that the Omusinga and his co-accused will one day return home," Mbayahi said.

He urged the various ethnic and political groups in the districts to prioritise peace and stability as key to development in the area.

"Her visit may have offended some people and pleased some but we should discard our differences and move ahead for the sake of peace and development," he said.

The RDC revealed that some royal guards who have so far surrendered were living peacefully in their homes urging the rest to also return home.