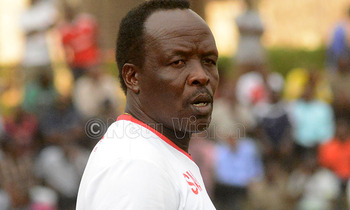 Express got back to winning ways following their 3-0 victory over Proline at Kavumba Recreation ground on Sunday.

The Red Eagles were coming from a 6-1 humiliation by Police last Wednesday that left a section of the club fans calling for Ssimwogerere's sacking.

A Dennis Sserukwaya penalty kick, Ivan Ocholit strike and an own goal by Arnold Sserunjogi ensured the three points for the Wankulukuku side.

Proline registered another loss following the 4-2 one to Vipers SC at Lugogo, further dampening their chances of relegation survival.

Proline midfielder Hakim Kiwanuka had a chance in the second half to pull one back but failed to convert from the spot after Rodgers Mato was brought down in the 18-yard box.

Next in line for Anthony Bongole's side is high-riding Police FC at Lugogo as Express that moved to 11th place on the table with 24 points, make a short trip to Namboole to play arch-rivals SC Villa in their next game.

Elsewhere, Maroons beat BUL 2-0 at Luzira prison Grounds with Fred Amaku and Steven Mukwala getting their goals. Mukwala took his tally to 12 goals this season.

At the Arena of Visions in Ndejje, URA continued their impressive start to the second round with a 1-0 win over Bright Stars.