Queen agrees 'period of transition' for Harry and Meghan

The couple said last week they wanted to step back from the royal frontline, catching the family off guard and forcing the monarch to convene crisis talks about the pair's future roles 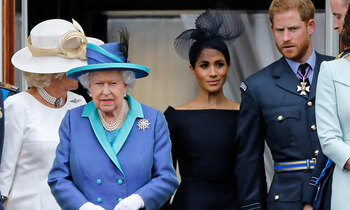 Queen Elizabeth II on Monday said Prince Harry and his wife Meghan would be allowed to split their time between Britain and Canada while their future is finalised.

The couple said last week they wanted to step back from the royal frontline, catching the family off guard and forcing the monarch to convene crisis talks about the pair's future roles.

The 93-year-old queen, her son and heir Prince Charles, and his two sons princes William and Harry began a family summit at her private Sandringham estate in Norfolk, eastern England, on Monday.

She called the discussions "very constructive" and said she and her family were "entirely supportive of Harry and Meghan's desire to create a new life as a young family".

"Although we would have preferred them to remain full-time working members of the royal family, we respect and understand their wish to live a more independent life as a family while remaining a valued part of my family," she added.

"Harry and Meghan have made clear that they do not want to be reliant on public funds in their new lives.

"It has therefore been agreed that there will be a period of transition in which the Sussexes will spend time in Canada and the UK.

"These are complex matters for my family to resolve, and there is some more work to be done, but I have asked for final decisions to be reached in the coming days."

The queen has previously said she wanted to find "workable solutions" to the crisis, which has dominated the media since the bombshell announcement last week.

Harry and Meghan's effective resignation has thrown up a series of questions, including how they can raise their own finances without compromising the monarchy.