2019 Handball review: A successful year for the sport

"Our biggest achievement was qualifying and participating in the All Africa Games in Rabat, Morocco this year in which we last participated a decade ago.." 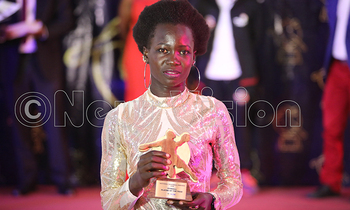 Female player Lillian Achola of Nkumba University handball club and her male counterpart Ibrahim Kongo of Prisons stood out as the best athletes in the 2019 handball season.

The two, together with Veteran sports Administrator Dan Musoke were crowned at an annual awards dinner for the season that had great improvement in the performance of the Uganda Handball Federation (UHF).

The Federation registered reasonable achievements which included the full implementation of the calendar and honouring all its international engagements.

A competitive and well-managed league besides the President's Cup, National Novices and Harriet Apako Memorial Tournaments and the impressive representation on the International Scene were worthwhile achievements for the UHF. There was consistency in the venues, reliable fixtures and improved result tallying including the top scorers on top of the improved communication.

Nkumba University Tornadoes emerged champions in the women category while Prisons edged defending champions Ndejje University to the league title in the last fixture of the league.

However, the female team beating Kenya on 38-24 aggregate at Namboole to qualify for the All Africa Games where they again defeated the same in Rabat to finish sixth overall, was the biggest achievement according to Secretary Saudha Babirye.

"Our biggest achievement was qualifying and participating in the All Africa Games in Rabat, Morocco this year in which we last participated a decade ago," Babirye noted.

The female teams also won the IHF Zone V Africa U-20 and U-18 tournaments held in Zimbabwe and focus still remains on building teams that will defend those trophies.

There was continued training of coaches and refereeing as capacity building policy extended the sport to Gulu and Soroti who are likely to be fully admitted as UHF members in assembly due in February.

There is a need to strengthen structures and other departments.

According to club officials, the federation is still wanting in communication and that should be addressed as far as international engagements are concerned.

Resources remain the biggest challenge stopping the Federation from organising more activities that give athletes playing time to improve on the quality athletes.

Several club officials are not knowledgeable about the rules governing the sport and this caused the disagreements.

With the general elections set for February, capable persons should be elected in the office to stay focused on building structures upcountry, development of grass-root talents and the successful organisation of IHF trophy to be hosted in Uganda.

There is a need to work on the allocation of referees, training of coaches and managers of management awareness of rules and regulations of the sport because this area created so many controversies.

There is no clear structure in the management of the league, a case of reference was the standoff between GOWE and the executive on the disqualification of certain teams.

The establishment of such a structure will improve on the management of the sport.

There must be a clear structure of filing petitions and appeals. Where, when, how and the period in which such petitions are supposed to be disposed-off must be clearly indicated.

The different awardees pose with their trophies.