When the case came up for hearing on Monday, Grade One Magistrate, Stella Amabilis, told Nyanzi that hearing of her case has since been suspended pending determination of her petition at the Constitutional Court. 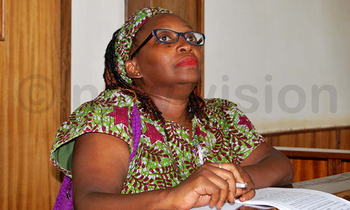 Buganda Road Chief Magistrate Court has suspended the hearing of the case in which the state wants former Makerere University researcher Dr. Stella Nyanzi subjected to a mental examination.

When the case came up for hearing on Monday, Grade One Magistrate, Stella Amabilis, told Nyanzi that hearing of her case has since been suspended pending determination of her petition at the Constitutional Court.

This prompted the magistrate to adjourn the case until January 13 for further mention.  On April 10, 2017, the 42-year-old was charged with two counts of cyber harassment and offensive communication under sections 24 and 25 of the Computer Misuse Act, 2011.

The prosecution alleges that on January 28, 2017, in Kampala district or there about Nyanzi used a computer to post on her Facebook page "Stella Nyanzi" and made a suggestion which is obscene or indecent under the law against the president.

The prosecution further alleges that between January and March 2017 in Kampala district, Nyanzi willfully and repeatedly used electronic communication to post offensive messages via her Facebook account, transmitted over the internet to disturb the peace or right of privacy of President Museveni with no purpose of legitimate communication.

However, the state insisted that Nyanzi should be subjected to mental examination under the Mental Treatment Act (MTA) in 1938 to ascertain her mental state before pleading to the charges.  In the Constitutional Court, Nyanzi is challenging the legality and constitutionality of the impugned provisions of the MTA.

Nyanzi claims that sections 1 to 6, of the act, which provide for an inquiry into the person's state of mind, adjudication of insanity, admission to the mental hospital and compulsory detention of a person suspected to be of unsound mind, contravene the constitution.

"The constitution enshrines equal protection and treatment of all persons before the law as one of the fundamental tenets of our constitutional democracy," Nyanzi contends.

Nyanzi avers that every person is guaranteed inherent and inalienable rights to liberty, dignity, and protection from any degrading treatment and freedom of conscience and expression, which assures citizen's freedom to think, speak, walk and work without fear of being arrested and detained.

Dr. Nyanzi contends that having taken a plea and the lower court's failure to discontinue the impugned inquiry under MTA was a travesty of justice intended to humiliate her, hence infringing on her right to a speedy trial.

She says that by permitting the removal of persons with mental illness or intellectual disability from society under the MTA threatens articles 21 to 29 of the Constitution that cannot be justified in a free and democratic government.

"Compulsory detention of a person in a mental institution leads to him or her being restrained to move or exercise their freedom, which contravenes the individual right to privacy," She contends.