Go to the judge who swore you - Court tells Besigye

The justices led by Kenneth Kakuru said although Besigye's petition raises issues for constitutional interpretation, they would not grant him remedies, saying he should seek the audience before his own court or before the "judge" who swore him in as President. 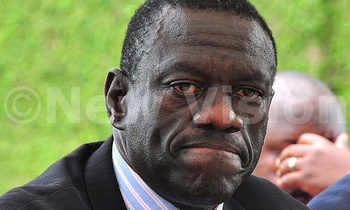 However, the Constitutional Court dismissed his petition in which he was challenging the constitutionality of the law under which the Police curbed down his activity.

Besigye had challenged the constitutionality of Sections of the Penal Code Act (PCA) under which the Police clamped down walk-to-work protests, his detention, and trial.

The justices led by Kenneth Kakuru said although Besigye's petition raises issues for constitutional interpretation, they would not grant him remedies, saying he should seek the audience before his own court or before the "judge" who swore him in as President.

Other justices who heard the case were Geoffrey Kiryabwire, Elizabeth Musoke, Cheborion Barishaki, and Stephen Musota.

On May 11, 2016, Besigye secretly swore himself in as president of Uganda, a day before the official swearing-in ceremony of President Yoweri Museveni.

According to the justices, after Besigye lost presidential elections, he formed his own government and national assembly, the matter, which was widely reported by the media.

Besigye challenged the results of the elections in court twice; 2001 and 2006 and lost both court battles. In 2011, he did not go to court contending that it was a waste of time.

Quoting stories from the media, the justices said Besigye says the constitution having been overthrown; the people of Uganda now have a duty to re-establish constitutional order, through campaigns of civil disobedience, such as those advocated by Activists for Change.

"Since there is no validly elected Government in power, it would follow that there are no legally constituted courts of law. This court it follows is illegitimate, and as such has no power to adjudicate on any dispute including determination of this petition.

"If indeed the president of this country was not elected by the people of Uganda, having usurped there sovereignty set out in Article 1 of the Constitution, it would follow that he has no power to appoint judges. The judges and justices appointed by him following the 2011 and 2016 elections have no judicial power, as they were appointed unconstitutionally," Kakuru said.

In light of this, Kakuru said, "It is an open challenge to the legality, legitimacy and the constitutionality of the sitting government. It goes beyond civil activism. Such challenges go to the root of the Constitution and all that is done under it.

He observed that the protest by Activists for Change (A4C) is not about civic and or human rights but is about the validity of the 2011 and 2016 elections and the constitutionality of the current Government.

According to the justices, the walk-to-walk campaign by Besigye and his group was a way of expressing social and political discontent against the Government of the National Resistance Movement (NRM).

The justices said the nonviolent activity attracted public excitement in the city of Kampala and a few other towns. It also attracted government attention.

"Once Article 3 of the constitution is invoked, which the petitioner has done, than any act or purported to be done under it is null and void. It would be declared as such once the constitutional order is re-established.

For this reason, the petitioner by requiring this court to determine this petition is engaging us in what is in my view is an exercise in futility," Kakuru said.

According to Kakuru, Besigye can only bring and maintain an action against the Attorney General appointed and serving in an established constitutional order having been appointed by a duly elected President.

Kakuru said Besigye seeks to hold accountable a government that he considers illegitimate, by invoking powers of a court appointed under such a government. "He cannot do so. It is an exercise in futility."

The justices said Besigye by swearing himself in as President, appointing a cabinet and a national assembly after the judgment and orders of the Supreme Court had been passed in the Amama Mbabazi verses Yoweri Kaguta Museveni election petition, Besigye was and is in contempt of court.