This will be the second season the men's league is played without playoffs. 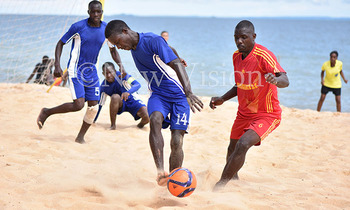 Buganda Royal moved top of the National Beach Soccer League standings following their 7-1 victory over hosts Mutoola in a league match played over the weekend at Mutoola Resort Beach in Ntenjeru, Mukono district.

Godfrey Lwesibwa and Paul Kato each scored a hat-trick before Swaibu Kakwaya added the other as Buganda moved to 16 points, just like second and third-placed St Lawrence and Isabeti respectively although Buganda has better goal difference.

Peter Mukwata scored a consolation for Mutoola who remained fourth on the log with 12 points but suffered their second consecutive defeat.

This season is going to be competitive more so that the best players at end of the season will have a chance to be selected for the national team that will compete in the 2020 AFCON Beach Soccer Championship that will be hosted here in December.

This season, the league is being played at three different venues; Mutoola Resort Beach, Lido Beach and Spennah Beach.

This will be the second season the men's league is played without playoffs. Previously the league was composed of two groups with the top four teams in each group going for  playoffs to determine the champion.