Why NRM is changing voting system

"We acknowledge we made errors during the primaries and we annoyed many but as Secretary-General, I want to say we are sorry," Kasule Lumumba said. 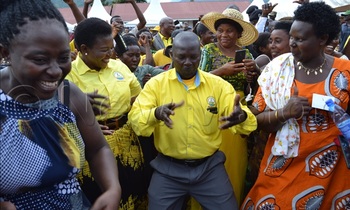 Lumumba and party supporters in Kasese. Photos by John Thawite

The ruling National Resistance Movement (NRM) is looking for funds to convene a national meeting aimed at changing its constitution to replace secret ballot voting to queuing behind its candidates in primaries.

The NRM Secretary-General, Kasule Lumumba, said the lining up method had proved effective in terms of costs and in fighting vote-rigging in the last Local Council One (LC 1) elections.

She hailed the people of Kasese for having revived the party's hope when they overwhelmingly voted pro-NRM supporters during the last Local Council One (LC I) elections.

She said one of the lessons from the last national primaries was more transparent and effective than the secret ballot because voting was at the same time countrywide.

She said that the party was considering using the method in the next NRM primaries.

"So as a party we are looking for funds to mobilise you the NEC members and the National Conference to come and change the NRM constitution if you wish to come the from voting by secret ballot but by lining up," she said. 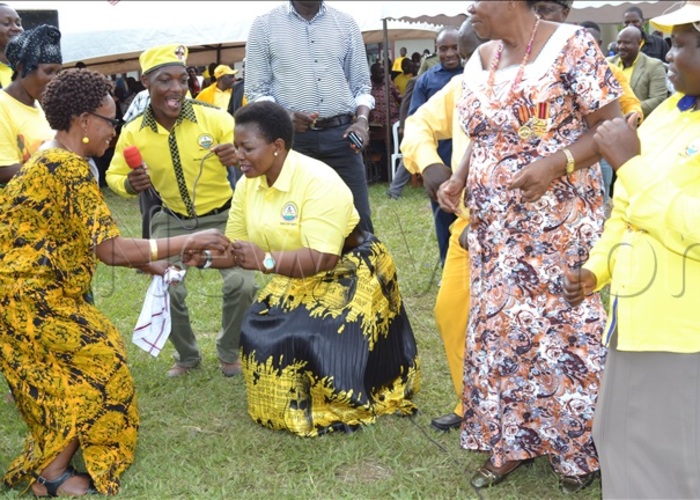 What went wrong?
Recalling that Kasese had been the first district in the country to support the NRM, Kasule who jetted in aboard a chopper, AF-605 shortly after 1:00 pm wondered what had gone wrong.

"You were the first district to support the NRM liberation and achieved a lot in service delivery but decided to step in your own pot and pour the water. What made you run away?" she asked.

She, however, said that the election of the NRM cadres into most of the LC1 elections in the district had raised the party's hope.

"I had given up on Kasese as Secretary-General, and decided to concentrate on the lower structures in government where we can maximise and win more and forget Kasese," said.

In 2016, the NRM lost all the six parliamentary, the LC5 and the District Council seats to the opposition Forum for Democratic Change (FDC).
President Museveni got only 41% of the total votes in the district. 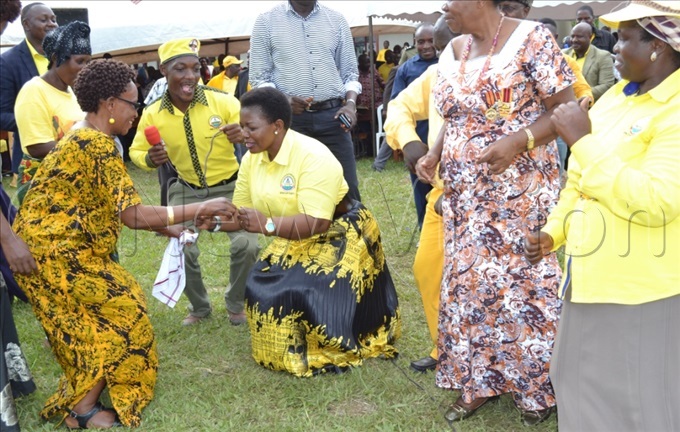 Apologies, blames
She apologised for the mistakes the NRM party made in the primary elections before those elections of 2016.

"We acknowledge we made errors during the primaries and we annoyed many but as Secretary-General, I want to say we are sorry," she said.

She blamed the poor election performance in the last elections in Kasese on mismanagement of the voters' registers, saying it contained ghost voters and people from other areas who were registered but returned to their original places at voting time.

She challenged the party leaders at various levels to ensure better service delivery and to associate with people more and to let their offices be for the people.

She hailed the residents for having worked hard to contain cross-border insecurity and the spread of Ebola from neighbouring the D.R Congo.

She lauded an earlier decision by the cadres from the municipality to field only one candidate for the forthcoming parliamentary elections, saying where NRM cadres disagree, they usually donate their contested seats to the opposition.

Earlier in their memo, the cadres, who included tens of female and male parliamentary hopefuls parade at the retreat, appealed to President Museveni to fulfill his pledge to split Kasese, saying they had ironed out their differences on the matter.

While on his presidential campaign trail in 2016, the president announced that Busongora North Constituency would become one of the new districts.

The cadres also requested the government to secure part of the 650-acre Mubuku Irrigation Scheme for women, youth and PWDs.

They also appealed for the rehabilitation of the defunct National Union of youth organisations (NUYO), bases in Maliba sub-county, Busongora North Constituency,  which was established in the 1960s, into a technical institute to skill the youth.

Kasule pledged to take up the issue of the NUYO with the Ministry of Education to have the NUYO rehabilitated and upgraded to a technical school in Busongora North as per the NRM constitution and policy to have at least one in each constituency.

She urged the leaders to follow her to Kampala so that she can initiate discussions between them and government organs related to the irrigation scheme.

The cadres had also asked for the reduction of the cut-off age of 80 years to accessing the Special Age Grant for the Elderly (SAGE) programme funds to 60 years.

But Kasule noted that discussions are underway but that owing to financial constraints and the big numbers involved, it cannot be immediately implemented.

Delivers sh25m
Kasule, who personally donated sh5m and delivered Shs25m from President Yoweri Museveni toward the retreat, challenged the NRM cadres to avoid over-depending on the NRM for all the facilitation to do the party work.

"When it comes to the NRM supporters, they always demand facilitation to carry out their activities. Does convening a village meeting require facilitation from the S.G?" she asked.

She said she cannot reach or facilitate the 605,000 villages in the country. When will I reach your village?" she asked.

"How can you call yourself an NRM chairperson in your location when you cannot mobilise the 30-members," she challenged.

According to the district acting NRM chairman, Fred Busing Police, the retreat was held under the theme "Strengthening NRM ideology among its cadres as a vehicle to sustainable wealth creation in Kasese district."

No sooner had she flown off around 3:15 p.m than scores of residents swarmed the site where the chopper had landed and parked in the Rwenzori High School playground scrambling to pluck grass, allegedly to use in treating various ailments.