Emery axed as Arsenal boss after worst run in decades 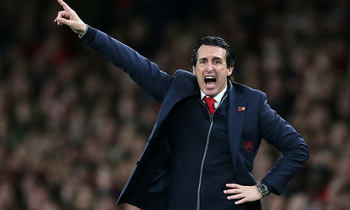 Unai Emery has been sacked as Arsenal manager after less than two years in charge and with the club without a win in seven games, their worst run since 1992.

His assistant Freddie Ljungberg takes over as interim manager during the search for a permanent replacement.

Arsenal fans had demanded "decisive action" from directors with the club's present run of five draws and two defeats this season just one match off equaling George Graham's run of eight without a win in 1992.

Club directors responded by axing the man brought in 18 months ago to revive a club stagnating after two decades under Frenchman Arsene Wenger.

"We announce today that the decision has been taken to Part Company with our head coach Unai Emery and his coaching team," read the statement.

"We have asked Freddie Ljungberg to take responsibility for the first team as interim head coach.

"The search for a new head coach is underway and we will make a further announcement when that process is complete."

Arsenal's league form has fallen away badly with five Premier League matches without a win -- they are the only side in the top half of the table with a negative goal difference.

Emery's cause has not been helped by the stripping of the captaincy from fiery Swiss international Granit Xhaka after he swore at Gunners fans when being substituted against Crystal Palace last month.

And a potential saviour, Gunners record signing Pepe, has been a huge disappointment since his £72 million ($93 million) move from French Ligue 1 outfit Lille in the close season.

The former Paris Saint Germain handler's first season ended in disappointment. Arsenal blew two chances for a return to the Champions League, winning just one of their last five games to finish fifth in the Premier League and then losing the Europa League final 4-1 to Chelsea.

"Our most sincere thanks go to Unai and his colleagues who were unrelenting in their efforts to get the club back to competing at the level we all expect and demand," read the club statement.

"We wish Unai and his team nothing but future success.

"The decision has been taken due to results and performances not being at the level required."